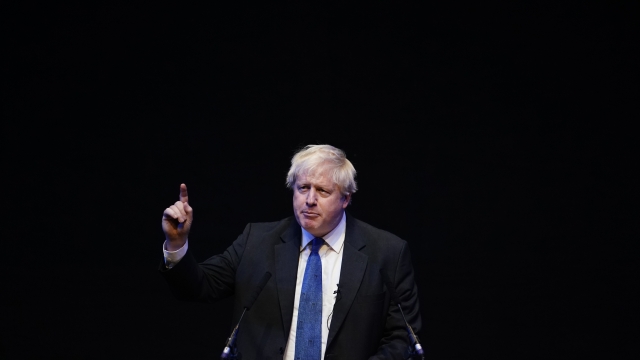 SMS
Boris Johnson Ordered To Court Over 'Misleading' Brexit Claim
By LeeAnne Lowry
By LeeAnne Lowry
May 29, 2019
The British MP is facing three counts of misconduct in public office for claims he made in 2016 while campaigning for Britain to leave the EU.
SHOW TRANSCRIPT

A judge has ordered British member of Parliament Boris Johnson to appear in court over allegations he misled the public about Brexit.

The private prosecutor in the case says Johnson abused the public's trust while holding a public office.

In 2016, before the public voted on leaving the European Union, Johnson campaigned for Brexit with a central claim that Britain pays 350 million pounds a week — about $443 million — to be a member of the EU. Critics say that figure was deliberately misleading: It doesn't consider a rebate that makes the cost closer to 190 million pounds a week, or about $240 million.

A poll that year found 47% of the British public believed Johnson's claim. Brexit passed with 52% of the vote.

Johnson's lawyers argued that the case was an attempt to undermine the results of the Brexit vote, but the judge threw out that argument.

Johnson is facing three counts of misconduct in public office, which has a maximum sentence of life in prison. Although he admitted his claim was inaccurate, he denies any wrongdoing.

Johnson is considered the front-runner to replace Prime Minister Theresa May.