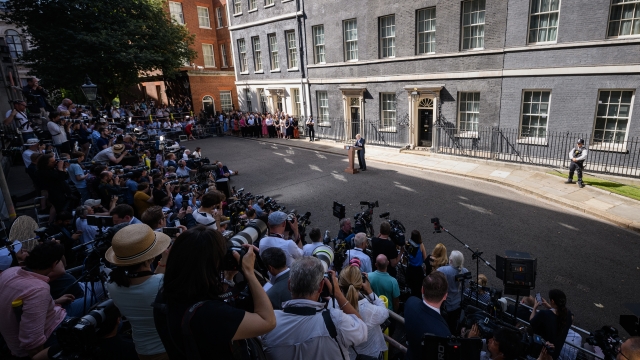 SMS
Boris Johnson Gives His First Speech As U.K. Prime Minister
By Katie Cammarata
By Katie Cammarata
July 24, 2019
Johnson promised a new Brexit deal that will let the U.K. develop a partnership with the EU "based on free trade and mutual support."
SHOW TRANSCRIPT

"I pay tribute to the fortitude and patience of my predecessor and her deep sense of public service," U.K. Prime Minister Boris Johnson said.

In his first speech as prime minister, Johnson thanked Theresa May and shut down Brexit naysayers.

"And so I am standing before you today to tell you, the British people, that those critics are wrong. The doubters, the doomsters, the gloomsters — they are going to get it wrong again. The people who bet against Britain are going to lose their shirts because we are going to restore trust in our democracy, and we are going to fulfill the repeated promises of Parliament to the people and come out of the EU on Oct. 31, no 'ifs' or 'buts.'"

Johnson promised a new Brexit deal that will let the U.K. develop a new partnership with the rest of Europe "based on free trade and mutual support."

"The time has come to act, to take decisions, to give strong leadership and to change this country for the better. And though the queen has just honored me with this extraordinary office of state, my job is to serve you, the people. Because if there is one point we politicians need to remember, it is that the people are our bosses."