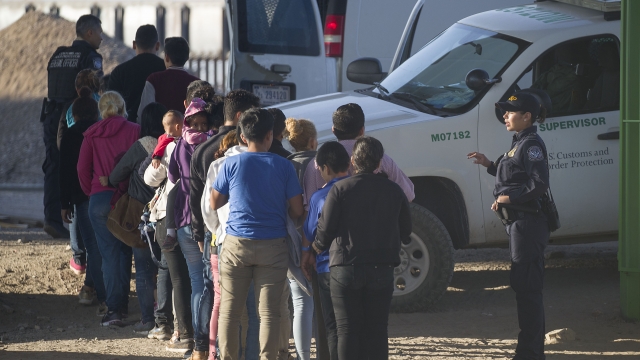 SMS
Border Agents Are Now Collecting DNA From Some Detained Migrants
By Katherine Biek
By Katherine Biek
January 7, 2020
Border Patrol agents are collecting cheek swabs from migrants apprehended and processed in the Detroit sector and at a Texas port of entry.
SHOW TRANSCRIPT

The Trump administration is now collecting DNA samples from some detained migrants.

U.S. Customs and Border Protection began the "limited, small-scale pilot program" for the DNA collection Monday. Under it, Border Patrol agents are collecting cheek swabs from migrants apprehended and processed in the Detroit sector and at the Eagle Pass Port of Entry in southwest Texas.

Those cheek swabs are then being sent to the FBI, which will enter the information into its criminal database. States and law enforcement authorities use it to identify criminal suspects.

The pilot program is set to last 90 days. According to officials, migrants between the ages of 14 and 79 could have their DNA collected. Migrants who have a physical or cognitive disability — as well as those who are trying to enter the U.S. legally — will not be subject to the program.

The Trump administration says it's collecting the samples using authority granted under the DNA Fingerprint Act of 2005. It allows DNA collection from any detained person, but in 2010 then-Homeland Security Secretary Janet Napolitano requested an exemption for immigrant detainees without criminal charges or waiting to be deported.

Back in October, the Department of Justice proposed new regulations to expand DNA collection under the law to include all detained migrants. CNN says those regulations are expected to be finalized soon.

The Department of Homeland Security says all border sectors and ports of entry will be collecting DNA from detained migrants in three years time.