Bureau Of Prisons Director Answers To Congress For Epstein's Death 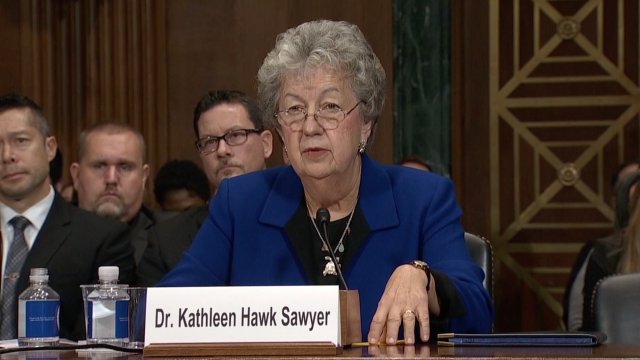 Just hours after federal prosecutors charged two prison employees Tuesday in connection with Jeffrey Epstein's death, Bureau of Prisons Director Dr. Kathleen Hawk Sawyer fielded questions from the Senate Judiciary Committee about that indictment and the state of the department.

Sen. Ben Sasse: "Do we have a lot of people who sleep on the job when they're supposed to be guarding federal inmates?"

Sawyer: "We have found a couple of other instances, and we have referred those to the inspector general's office. And I'm encouraging if people just chose not to do their job, we're hoping the U.S. attorney's office will pick up those cases and prosecute them for us. Because we don't want those folks in the Bureau of Prisons. They are dangerous to everybody, the inmates and the staff."

Dr. Sawyer took over as BOP director nine days after Epstein was found dead in his Manhattan prison cell. She previously served as director from 1992-2003. Since Epstein's death, the FBI and the Department of Justice have opened investigations into the BOP. His death was ruled a suicide, but it exposed several problems the Metro Correctional Center, and the Bureau of Prisons more broadly, has been facing. First among them, staffing.

"We are doing everything we can possibly think of to try to speed up our recruitment process and our hiring process. One of the things that's hurting us, we hired 15,000 employees when I was director before, in that 10-year period. Those staff are now all eligible to retire. And so many of them are retiring at the same time, we're trying to hire new staff. And so we hire five new staff and three retire."

The Metro Correctional Center, like many federal jails and prisons across the country, is overpopulated and understaffed. Although the jail was built to accommodate 474 inmates, it held 763 male prisoners at the time of Epstein's death. Overall, the Federal BOP has lost 7,300 staff members since 2016, with the largest drop coming after the Trump administration's 2017 hiring freeze.

Sawyer is barred from reviewing evidence surrounding Jeffrey Epstein's death and interviewing prison staff about the incident until both investigations are over. In the meantime, she says the bureau is working to hire more staff and replace old camera equipment across the BOP.