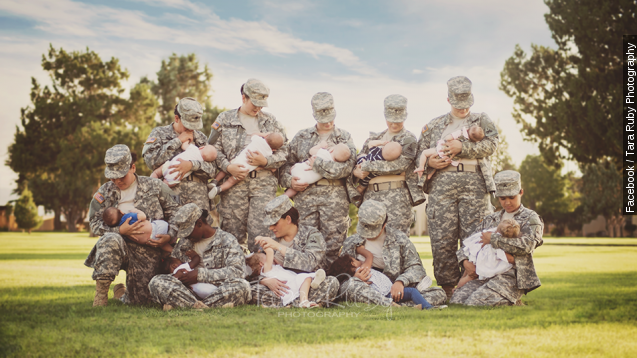 A photographer in Texas captured a group of active duty moms breastfeeding their children.

Tara Ruby, from Tara Ruby Photography, explained that she was active duty Air Force from 1997 to 2001, when "support for breastfeeding moms wasn't even an option or a consideration."

She thanked the group Breastfeeding in Combat Boots and the Fort Bliss P3T Program, along with her commander, for making the photo happen.

And apparently the photo keeps getting removed from Facebook. Both Ruby and the Breastfeeding in Combat Boots group have said they have reposted it after it has been removed.

This is despite the fact Facebook says it "always allows photos of women actively engaged in breastfeeding."

Ruby used to pump in empty offices and bathrooms when she served. CNN says Ruby was thrilled to learn about a new nursing room at Fort Bliss' post in El Paso, Texas. She offered to donate photos to decorate the new room, which is how this all came to be.

And while some have reported the photo or voiced concerns for the women involved, Ruby said she did it to #normalizebreastfeeding.

And while Ruby did get permission from the right people, in 2012 it was a different story. A different photographer's photo of women breastfeeding went viral, and a Washington National Guard spokesperson said the photo violated policy because the women were in uniform to further a cause.