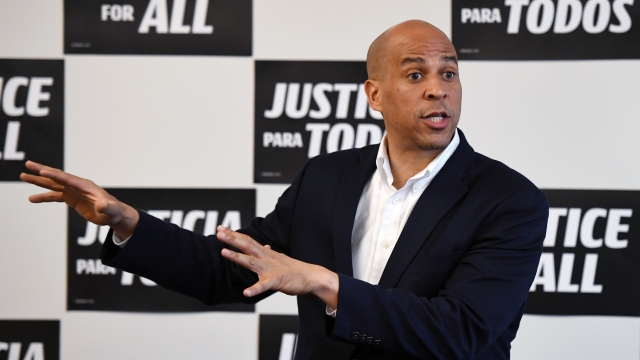 Sen. Cory Booker is making gun control a central tenet of his presidential campaign. And there's one statement he's made that sounded pretty surprising.

Booker has made similar arguments elsewhere. For example, he wrote on Twitter, "Why should toy guns be subject to more federal regulation than real ones?"

The Consumer Product Safety Commission is responsible for overseeing and regulating thousands of products in the U.S., toy guns included. There are also federal laws regulating toy guns. For example, all imitation firearms have to have one of four government-approved color markings — that's where that iconic orange cap comes from.

But by law, the CPSC is not allowed to regulate firearms. So if we stopped here and assumed Booker meant to say "safety regulations," he'd be right: There are zero federal regulations spelling out safety requirements for firearms.

Seven states and Washington, D.C., have filled that gap by passing some kind of local gun safety law. California, Massachusetts and New York have some of the most robust regulations, requiring specific safety features on handguns and mandating safety tests.

But Booker didn't say "safety regulations." And the federal government certainly has other types of laws pertaining to guns. All guns in the U.S. must have a serial number, and federal law limits who can sell, buy and possess a gun.

Supporters of new gun control efforts, like Booker, are right about the lack of federal gun safety regulations. But the senator went a step too far when he said there are "no regulations for weapons on our streets."