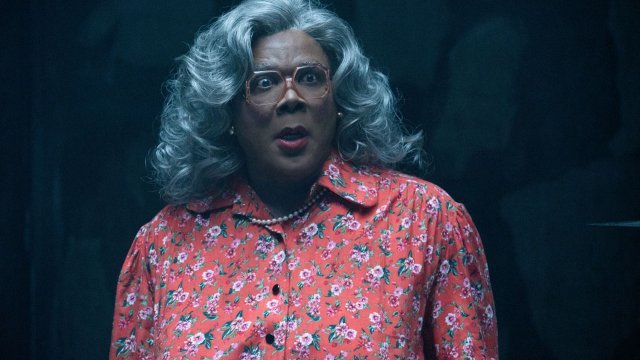 SMS
Tyler Perry's 'Boo 2!' Tops The Box Office While 'Geostorm' Falls Flat
By Jamal Andress
By Jamal Andress
October 22, 2017
For the second year in a row, Mabel "Madea" Simmons is at the top of the box office the weekend before Halloween.
SHOW TRANSCRIPT

As Halloween weekend approaches, moviegoers have plenty of horror movie options at the theater. But despite that, some of you still went and saw Madea.

Taking the No. 1 spot this week is "Boo 2! A Madea Halloween" — because "Boo" just demanded a sequel. Tyler Perry's latest turn as Mabel "Madea" Simmons brought in an estimated $21.6 million in its debut weekend.

While the "Boo 2" release didn't fare quite as well as the original, it's still on track to make its money back at the box office. Just like all the other Madea movies, this is a low-budget release catered to an extremely loyal fan base.

As for the reviews, Tyler Perry, take it away!

"Don't expect 'Schindler's List.' Just go in there and have a good time. … I don't think any Oscars are going to be calling for this one, I really don't," Perry said on The Tonight Show.

I couldn't have said it any better myself. And with that, on to No. 2.

You know what's worse than a bad movie? An expensive bad movie. Taking the No. 2 spot this week is Gerard Butler's much-maligned "Geostorm," bringing in an estimated $13 million in its opening weekend.

All films have the potential to flop. But when you spend $120 million to produce a film, the stakes are noticeably higher.

And while "Geostorm" has been lampooned by critics, it also suffered from very bad timing. With major hurricanes hitting Texas, Florida and Puerto Rico just in the last couple months, it's very difficult to advertise a natural disaster film — not to mention get people to go see it.

Warner Bros. even took down the movie's posters in theaters across the country to be sensitive to natural disaster victims.

But all hope isn't lost for "Geostorm." As it stands, the film has made nearly $50 million overseas, and it still hasn't opened in China — the second-largest movie market in the world, right behind the U.S.

And finally at No. 3 is "Happy Death Day," bringing in an estimated $9.3 million in its second week out. Solid reviews and positive word-of-mouth have carried this “Groundhog Day” horror flick to a $53 million worldwide total in just 10 days.

As for next week, is it really Halloween without Jigsaw?