Bono Wears Sunglasses So Often Because He Has Glaucoma 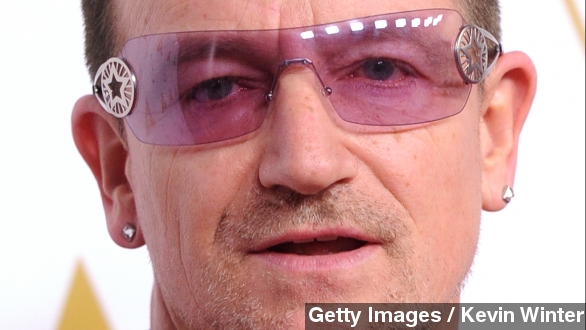 SMS
Bono Wears Sunglasses So Often Because He Has Glaucoma

By Jasmine Bailey
October 17, 2014
In an interview with BBC U2 lead singer Bono was asked why he always wears sunglasses. He then admitted to suffering from Glaucoma.
SHOW TRANSCRIPT

We've seen Irish rock band U2 in the news quite a bit lately.

Particularly after the band received harsh backlash when its new album "Songs of Innocence" was automatically added to 500 million iTunes customers' playlists. (Video via Apple)

But now it's the band's frontman Bono that's making headlines. Take a look at these pictures —notice a trend in the singer's style? We'll give you a hint — sunglasses.

The 54-year-old is known for rocking tinted shades 24-7, and now we know why. Bono admitted on the BBC's Graham Norton show Friday he suffers from glaucoma.

"I have glaucoma for the last 20 years. ... Have you ever had any strange visions and steam coming into the room and rings around the lights. And I went, oh, yeah."

Glaucoma is an eye disease that, without treatment, can lead to blindness. There is no cure but proper care can delay progression.

Glaucoma is caused by a build up of fluid in the eye that would, under normal circumstances, drain on a regular basis. That build up causes pressure on the optic nerve which transfers visual information to the brain and that's what can cause blindness. (Video via Divya Prabhac Eye Hospital)

People mag quotes Bono as saying he has good treatments for the disease.  The award winner continued saying, "You're not going to get this out of your head now and you will be saying, 'Ah, poor old blind Bono.'"

But not everyone is doting over the singer's newly reveled condition — there's actually been some criticism regarding the timing of his announcement.

With The Washington Post writing, "​Bono has really tried to endear himself to people this week​: First, apologizing for the whole 'U2 album suddenly showing up in your iTunes library' thing. Now, he’s explaining ... the reason he wears his signature sunglasses. "

BONO VIA THE TELEGRAPH: "Oops. I'm sorry about that. ... Got carried away with ourselves. ...  Drop of megalomania, touch of generosity, dash of self-promotion"

Bono says with the treatment he will be just fine, but noted without his glasses, his eyes are very sensitive to light.

This video includes images from Getty Images and che / cc by sa 2.5.