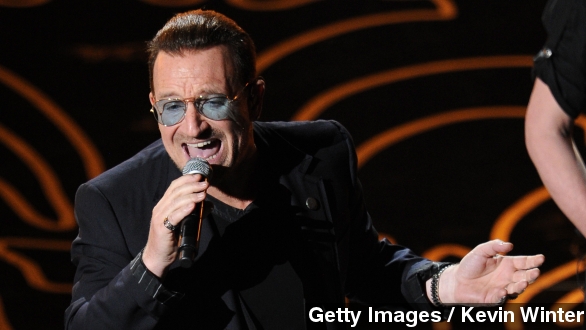 SMS
Bono's Plane Lands Safely After Door Detaches Mid-Flight
By Cliff Judy
By Cliff Judy
November 13, 2014
While some report the U2 singer had a brush with "disaster" or "catastrophe," an airport spokesman says the plane wasn't in danger of crashing.
SHOW TRANSCRIPT

Fear not, U2 fans. Your lead singer is alive and well despite part of his plane falling off Wednesday mid-flight. But to hear it from sources of the outlet that broke the story, it was a close call.

A source close to the singer, whose aviation expertise at this moment is unknown, told the outlet, "He was extremely lucky, the plane could have gone down." And after hearing a thud mid-flight, "When they landed they were horrified to learn that the compartment at the rear of the plane had completely detached."

The singer had hopped a flight from Dublin to Berlin to accept a German music award.

The private plane was a Learjet, but with Daily Mail breaking the story Wednesday and the incident happening earlier in the day, no, there do not appear to be any grainy, far off shots of a damaged plane sitting on a tarmac.

And while surely terrifying, some officials at the airport where he landed have already downplayed the singer's apparent brush with "disaster" or "catastrophe."

An airport spokesman told German outlet B.Z. Berlin, "To our knowledge, there was no danger of falling."

So, good news, everyone! U2 will get to make that trip to the U.S. next week where the band is scheduled to play a set every night of the week for Jimmy Fallon on the "Tonight Show."