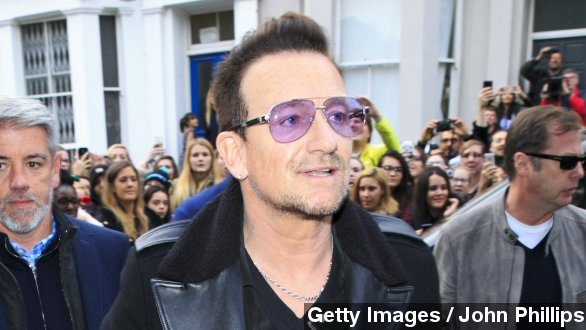 SMS
Bono's No Good, Very Bad Week: U2 Singer Needs Arm Surgery
By Matt Moreno
By Matt Moreno
November 17, 2014
The U2 frontman injured his arm in a bike accident while in New York City, days after a door on a plane he was traveling in fell off mid-flight.
SHOW TRANSCRIPT

U2 frontman Bono is having himself quite the eventful past few days and, surprisingly, none of it has to do with the band's music.

U2 is canceling their upcoming appearance on "The Tonight Show Starring Jimmy Fallon" after Bono hurt his arm in a bicycling accident. Originally, the band was scheduled to spend a week-long stint on the show.

A post on U2's website reads, "It looks like we will have to do our Tonight Show residency another time - we're one man down. Bono has injured his arm in a cycling spill in Central Park and requires some surgery to repair it."

This latest incident comes just days after the cargo door of a private jet Bono was traveling in fell off on a flight to Berlin, launching the door and sending luggage tumbling about 8,000 feet down. (Video via ABC)

Which is all leading to headlines like this — "Bono's bloody Sunday" ... "Universe officially out to get Bono" ... and "Is Someone Trying to Kill Bono?"

But, we must point out there is a movie out there titled "Killing Bono" that loosely follows the singer's life growing up. Bono, however, is not killed in the movie, nor is he injured in a bike accident. (Video via Paramount Pictures / "Killing Bono")

Bono, we're thinking you should stay indoors for a little while and sit the next few plays out.

And while you do that, don't even THINK about giving out a free album to Apple users everywhere. You've done enough.

This video includes music from Kevin MacLeod / CC BY 3.0