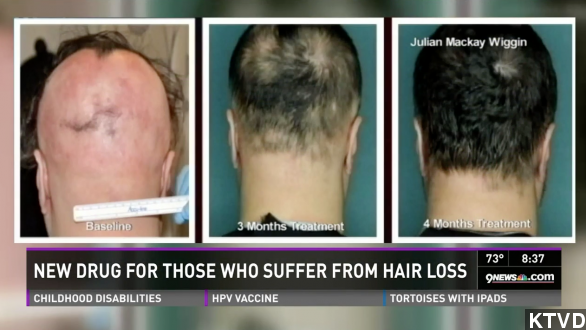 By Danny Matteson
August 18, 2014
Researchers performed an experiment using an FDA-approved drug known as ruxolitinib. They found it to be successful in the majority of patients.
SHOW TRANSCRIPT

​New hope for those with the autoimmune disease alopecia, as researchers have found a bone marrow drug to regrow hair in some patients.

​Researchers from Columbia University performed an experiment using an FDA-approved drug known as ruxolitinib, which is normally used to treat a bone marrow disorder. They found it to be successful in the majority of patients. (Video via YouTube / Jakafi)

KTVD: "After experiments with mice were successful, the drug was then tested on three patients with moderate to severe forms of the disease. And all three experienced total hair regrowth within four or five months."

The disease, alopecia, is an autoimmune disorder affecting about 1 percent of the population. It occurs when the immune system attacks and destroys hair follicles — causing hair to fall out. (Video via YouTube / SBS2Australia)

YOUTUBE / BELGRAVIA CENTRE: "The body's germ-fighting cells attack the hair follicles as if they were a bacteria or a virus."

The drug reportedly works on the disease by blocking enzymes that in turn suppress immune system activity. (Video via YouTube / Dinesh Bhutada)

And although the disease isn't life-threatening, the study's lead author says it could change the lives of those affected by alopecia.

"We've only begun testing the drug in patients, but if the drug continues to be successful and safe, it will have a dramatic positive impact on the lives of people with the disease."

But others are urging researchers, and those affected by alopecia, to pump the brakes before jumping to any conclusions.

Speaking to The New York Times, a dermatologist with the University of Pennsylvania said the way the drug was administered was "very toxic" with the possibility of causing side effects such as liver and blood problems. He added, "Patients are going to rush in demanding this treatment, and I would not give it."

The bone marrow drug isn't the only one researchers are looking at to regrow hair, though. As we reported in June:

"Yale researchers were able to successfully regrow a 25-year-old patient's hair after eight months of treatment with the arthritis drug tofacitinib citrate."

The bone marrow drug was taken in tablet form twice daily. Unfortunately, researchers say it will not be effective for other forms of hair loss, such as male pattern baldness, as that form is caused by hormones. (Video via TXCN)