U.S. Officials Unsure About When Talks With North Korea Will Start 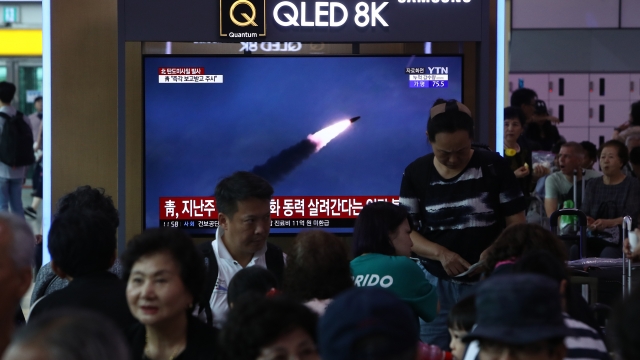 SMS
U.S. Officials Unsure About When Talks With North Korea Will Start
By Katherine Biek
By Katherine Biek
August 1, 2019
U.S. national security adviser John Bolton said the U.S. is "still waiting to hear from North Korea" about setting up the next round of nuclear talks.
SHOW TRANSCRIPT

U.S. national security adviser John Bolton said the Trump administration is "still waiting to hear from North Korea" about setting up the next round of denuclearization talks.

Bolton's comments to Fox Business Network on Wednesday came after North Korea's launches of short-range ballistic missiles both this week and last week.

But the national security adviser also questioned Pyongyang's willingness to resume talks with the U.S.,  since it's been more than a month now since Kim and President Trump met in North Korea on June 30.

Bolton said, "You have to wonder when the real diplomacy is going to begin."

Another member of the Trump administration — Secretary of State Mike Pompeo — told reporters Wednesday that he hopes those denuclearization talks get started soon.

"We think they'll be started before too long. I'm very hopeful. Chairman Kim had said when the two leaders met at the DMZ that they would start in a few weeks. It's taking a little longer than that, there's been a little big of preliminary work to be done."

North Korea previously threatened to resume nuclear and missile tests in protest over upcoming joint military exercises between the U.S. and South Korea.

In addition to the recent short-range ballistic missile launches, the country test-fired a new multiple-launch guided rocket system, according to state media on Thursday. North Korea hasn't launched a long-range weapon since November 2017.