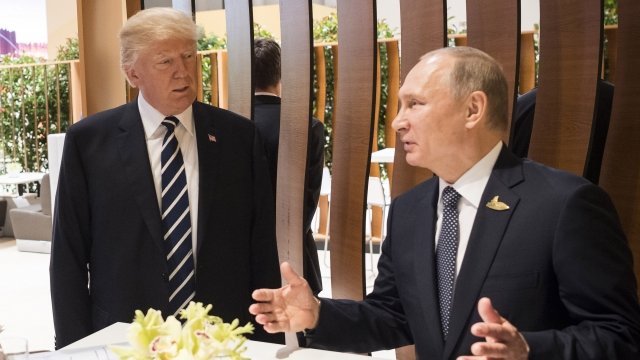 White House national security adviser John Bolton told reporters that as of Thursday, there were no plans to reschedule a meet-up between the two leaders. That's because of a maritime conflict between Russia and Ukraine.

"It's something that the president feels strongly about. I've spoken to the Russians myself on the subject, so that's where we are," Bolton said. "I don't see circumstances in the foreseeable future where such a meeting could take place until the crews and the ships are released."

It all started when Russia seized three Ukrainian naval vessels and their crews off the coast of the Crimean Peninsula, worsening already tense relations between the two countries. The move prompted Ukraine to declare martial law on Russia.

Last month, Trump tweeted that he was canceling previously scheduled talks with Putin at the G-20 summit because Russia hadn't returned the Ukrainian ships or crew members. And apparently there's been no movement since then.

At the time, Trump did emphasize that he still wanted to meet with Putin after the situation with Ukraine is resolved.