Bolton In Moscow As Tensions Rise Over Nuclear Treaty 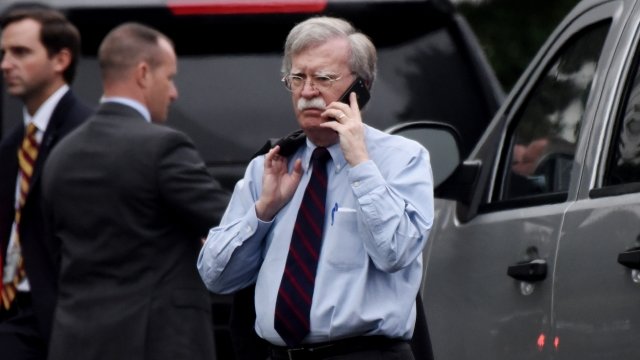 SMS
Bolton In Moscow As Tensions Rise Over Nuclear Treaty

By Katherine Biek
October 22, 2018
President Donald Trump announced Saturday that he will withdraw the U.S. from a nuclear weapons treaty with Russia.
SHOW TRANSCRIPT

Bolton's travel plans were scheduled before President Donald Trump announced Saturday that the U.S. will withdraw from the pact with Russia.

President Ronald Reagan and General Secretary Mikhail Gorbachev signed the treaty in 1987. It prohibits land-based nuclear missiles with ranges from 310 to 3,420 miles. But President Trump argued that Russia isn't holding up its end of the deal.

A Kremlin spokesman denied that accusation Monday and said that the U.S. is actually the one violating the treaty by using anti-missile systems that are also capable of launching short and medium-range missiles.

Russian President Vladimir Putin is expected to press Bolton for more clarity over the U.S.' decision when the two meet this week.

Though Putin's deputy foreign minister already said Russia will retaliate with "military-technical" measures if President Trump does end up pulling the U.S. out of the nuclear treaty. The Trump administration will need to wait six months after giving formal notice for its withdrawal from the treaty to take effect.