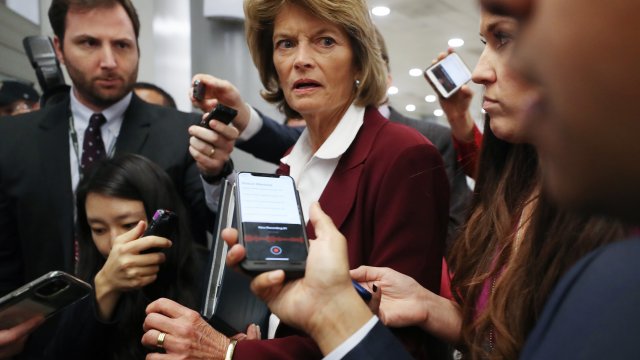 Chief Justice John Roberts gaveled in one final day of defense presentations in the impeachment trial of President Trump.

The president's attorneys told senators impeachment is a grave option. They accused Democrats of lowering the bar for removing a president with a political hit job.

"That's politics, unfortunately," President Trump's attorney Jay Sekulow said. "Hamilton put impeachment in the hands of this body, the Senate, precisely and specifically to be above that fray."

Democrats say the president put himself above country. They accuse him of withholding military aid and a White House meeting from Ukraine until it helped smear President Trump's political rival, Joe Biden.

President Trump denies it, but in his upcoming book, former national security adviser John Bolton says he heard firsthand from the president of a "quid pro quo" to hurt Biden, confirming the Democrats' claims.

Now, senators must decide whether to call Bolton to testify.

President Trump's ally Sen. Lindsey Graham warned that a call for Bolton to testify could open the door to other witnesses, including potentially Biden or his son Hunter, who served on the board of a Ukrainian energy company when his father was vice president.

"If people want witnesses, we're going to get a lot of witnesses," Graham said. "This idea of 'one and one' makes zero sense to me."

Democrats say talk of the Bidens is a distraction from the real issue: President Trump's alleged pressure campaign on Ukraine.

"It seems like every day, some new revelation emphasizes our request for relevant witnesses and documents and gives it momentum," said Minority Leader Sen. Chuck Schumer.

Before senators decide whether to hear from Bolton — or anyone else — they have two days to ask questions in writing to each side: House managers and the president's team.

Without new witnesses, the trial could end in victory for the president on Friday.

His State of the Union address is set for Feb. 4.