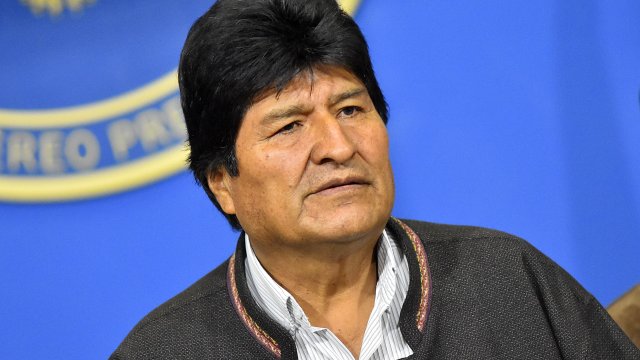 SMS
Bolivian President Evo Morales Resigns Over Calls Of Election Fraud
By Lauren Magarino
By Lauren Magarino
November 11, 2019
One of Latin America's longest-serving leaders is stepping down after three weeks of deadly protests against him.
SHOW TRANSCRIPT

One of Latin America's longest-serving leaders is stepping down after three weeks of deadly protests.

"I have listened to the Central Workers Union, also listening to the Catholic Church, I have decided to resign from my position as president," Evo Morales said.

Hundreds of Bolivians poured into the streets to celebrate the resignation Sunday.

It's a far cry from the the past three weeks, when three protesters died and hundreds were injured in a movement against Morales.

The Organization of American States audited the election.

According to the final report, its team couldn't validate the results of the election, and recommended another election under "new electoral authorities."

Morales later tweeted saying he's not leaving the country, adding "If someone thinks we are stealing, then tell me. Present the proof."

Bolivia's vice president and leaders of both chambers of congress also resigned, making opposition lawmaker Jeanine Añez next in line for the post.

She said she would assume the presidency and call new elections.