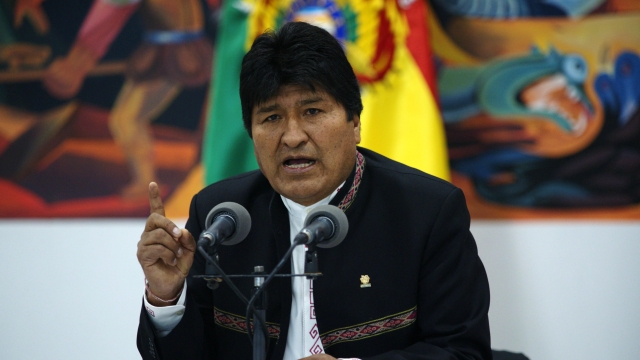 SMS
Bolivia's Former President Morales Accepts Asylum In Mexico
By Meg Hilling
By Meg Hilling
November 12, 2019
Despite initially saying he would stay in Bolivia, Morales announced his departure to Mexico on Monday following what he has described as a "coup."
SHOW TRANSCRIPT

Former president of Bolivia Evo Morales is off to Mexico after accepting a political asylum offer.

One of Latin America's longest-serving leaders, Morales stepped down as president after three weeks of deadly protests in Bolivia. Protesters and opposition accused Morales of rigging the vote in Bolivia's October election. Morales, who was the country's first indigenous president and had served for nearly 14 years, has denied the accusations.

Morales has described the situation as a coup by Bolivia's military and opposition.

Despite initially saying he would stay in Bolivia, Morales announced his departure to Mexico on Monday.

He wrote on Twitter: "It hurts to leave the country for political reasons, but I will always be looking out. Soon I will return with more strength and energy.”

Bolivia's vice president and leaders of both chambers of congress have also resigned, making opposition lawmaker Jeanine Añez next in line as interim president. She says she'll step into the role and call for new elections.