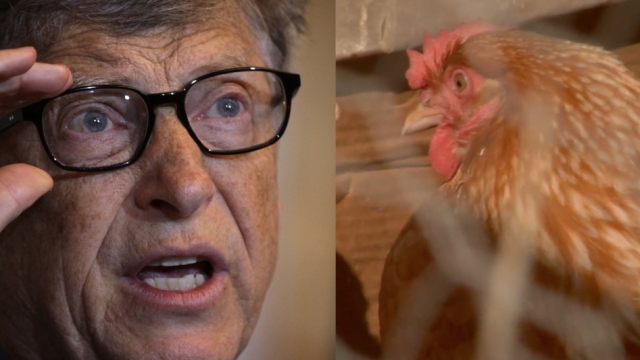 SMS
Bolivia Isn't Interested In Bill Gates' Chickens
By Samantha Crook
By Samantha Crook
June 17, 2016
Bill Gates wrote, 'It's pretty clear to me that just about anyone who's living in extreme poverty is better off if they have chickens.'
SHOW TRANSCRIPT

Bill Gates is giving away a bunch of chickens. But it turns out Bolivia doesn't love that gift.

Gates is working with Heifer International to donate more than 100,000 chickens to alleviate extreme poverty abroad. Citing the chickens' low maintenance cost and protein-rich eggs, Gates wrote, "It's pretty clear to me that just about anyone who's living in extreme poverty is better off if they have chickens."

Gates' effort focuses on sub-Saharan Africa, but Bolivian officials say their country was also on the receiving end of Gates' chicken donations Wednesday — and a little offended. One official told outlets, "He does not know Bolivia's reality to think we are living 500 years ago, in the middle of the jungle not knowing how to produce."

Bolivia has seen economic growth in recent years, but it still struggles with poverty. The International Fund for Agricultural Development says nationwide poverty in Bolivia was at 39 percent in 2013; that's a steep drop from 61 percent in 2005.

This video includes images from Getty Images and a clip from The Gates Notes.