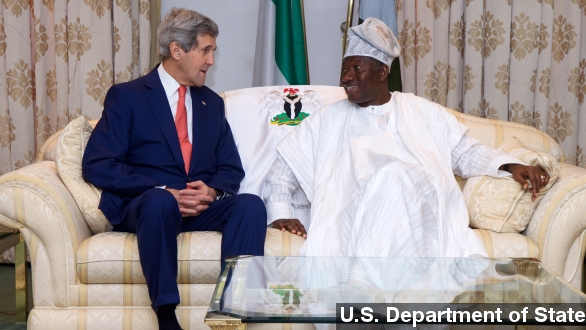 The Nigerian military says it repelled an attack on the city of Maiduguri early Sunday morning, but the fate of nearby town Monguno is unclear, as officials told Voice of America that Boko Haram took over the military barracks there. (Video via Google Earth)

Maiduguri has often been the target of Boko Haram attacks, including two suicide bombings in the city earlier this month that were carried out by young girls and killed dozens. (Video via France 24)

The attacks came just a day after Nigeria's President Goodluck Jonathan visited Maiduguri, in the heart of Boko Haram's area of operations, and promised to defeat the group. (Video via Oak TV)

Jonathan is up for re-election next month and was back in Lagos Sunday to greet Kerry.

Kerry is expected to urge Jonathan and his opponent, retired general Muhammadu Buhari, to work for fair elections and to respect the outcome, with timing key in the face of the Boko Haram threat. (Video via BBC)

Analyst Jennifer Cook told NPR, "If the military and the political forces are squabbling over an election result, there's a big opportunity for Boko Haram to expand its hold in the Northeast."

The New York Times writes that a former general, Buhari has become a real political threat in the wake of continued attacks from Boko Haram, despite an unpopular 20-month stint as military dictator of the country in the '80s.

At least one Nigerian official has even called that elections be delayed, considering the Boko Haram threat, and it is unclear how voters will participate in areas under the group's control. (Video via Channels Television)

Kerry is expected to stay in Lagos, some 760 miles away from the city of Maiduguri.

This video includes an image from Getty Image.