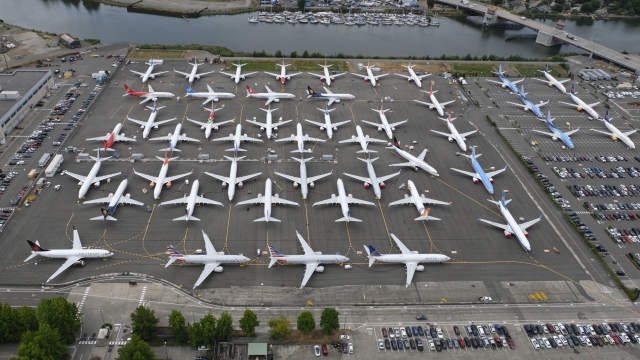 SMS
Boeing Takes A Financial Hit To Pay Customers For 737 Max Groundings
By Caitlin Baldwin
By Caitlin Baldwin
July 19, 2019
Boeing announced a $4.6 billion after-tax charge to compensate for disruptions from canceled flights and delivery of the aircraft.
SHOW TRANSCRIPT

Boeing says it's taking a multi-billion dollar hit in response to its 737 Max planes being grounded across the globe.

The company announced Thursday it will take a $4.6 billion after-tax charge to compensate customers for disruptions from canceled flights and delivery of the aircraft. And Boeing expects a $1.7 billion loss in the second quarter due to the increased time it takes to produce the 737 Max plane now.

Boeing CEO Dennis Muilenburg says Boeing is staying "focused on safely returning the 737 MAX to service," saying, "Nothing is more important to us than the safety of the flight crews and passengers who fly on our airplanes."

Aviation authorities across the globe began grounding the jets back in March following two fatal crashes that killed 346 people.

The company will reevaluate the impact of the grounding of 737 Max planes when it releases its full second-quarter earnings next week.