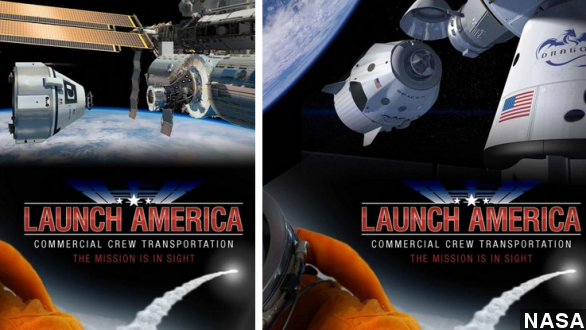 By Steven Sparkman
September 16, 2014
NASA awarded contracts to both Boeing and SpaceX Tuesday to carry out manned missions to the International Space Station.
SHOW TRANSCRIPT

NASA handed out two contracts worth $6.8 billion Tuesday and with them announced the imminent return of human spaceflight from the U.S.

NASA ADMINISTRATOR CHARLES BOLDEN: "The Boeing corporation ... and Space Exploration Technologies, or SpaceX, have each presented to us designs that will allow us to fly crews to the International Space Station in just a few years."

The companies have been working on their manned spacecraft since 2010, a year before the NASA Space Shuttle program was retired.

Ever since the space shuttle Atlantis touched down in July 2011, the U.S. has had to rely on Russia's Soyuz spacecraft for trips to the International Space Station. (Video via Russian Federal Space Agency)

The private craft are meant to carry their first travelers to the ISS by mid-2017, ending a six-year gap in U.S. manned spaceflight. So let's take a look at what America's astronauts will be traveling in.

Boeing's crew capsule is the CST-100, a roomy seven-person ride designed to be reused up to 10 times.

NASA astronauts suited up and hopped inside in 2013, and they seemed to prefer it over the Soyuz.

SpaceX's Dragon, which also seats seven, has tended to get a bit more press than Boeing's offering, but that could have to do with its charismatic CEO Elon Musk, its penchant for big press events and its much cooler name.

SpaceX's Dragon also has the advantage of already having flown five missions to the ISS, carrying supplies and cargo but not people.