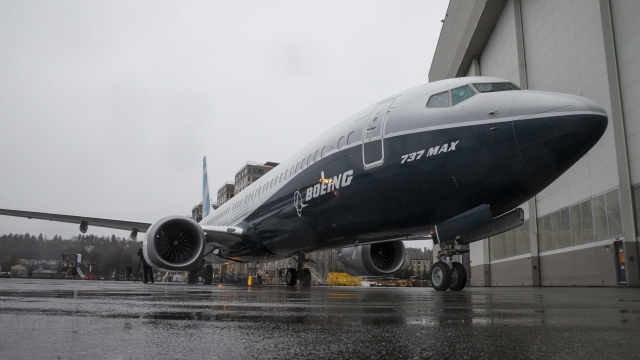 SMS
Boeing Says It Knew About 737 MAX Sensor Issue Back In 2017
By Katherine Biek
By Katherine Biek
May 6, 2019
That's way before a new Boeing 737 MAX airplane owned by Lion Air crashed in October 2018, killing everyone on board.
SHOW TRANSCRIPT

Boeing now acknowledges that it knew about a problem with its 737 MAX aircraft well before the Ethiopian Airlines and Lion Air plane crashes that killed 346 people.

In a statement Sunday, Boeing admitted its engineers discovered an issue with a safety feature called the angle-of-attack disagree alert back in 2017. That alert is meant to tell pilots if the plane's sensors are transmitting false data about the pitch of the plane's nose.

That disagree alert was supposed to be a standard feature on all 737 MAX planes. But Boeing's engineers found it would only work if airlines also purchased a separate, optional feature.

Boeing said at the time it conducted a review and determined that the non-working alert "did not adversely impact airplane safety or operation." That review also concluded the two features could be "de-linked" in a subsequent software update.

Boeing noted its senior leadership was not made aware of the faulty safety feature until after the Lion Air crash in October 2018 involving a new 737 MAX 8 plane. That's also when Boeing shared its findings with the FAA.

Following the Lion Air crash, Boeing convened a safety review board in December 2018. It determined the absence of a working AOA Disagree Alert on some of its aircraft was still not a safety issue.

Although an FAA spokesman criticized Boeing in a statement Sunday for failing to disclose the problem sooner, he noted that agency experts also determined that the non-working alert presented a "low risk."

Investigators have yet to determine the exact causes of the Lion Air crash and the Ethiopian Airlines crash in March. But preliminary reports suggest pilots of both planes may have had trouble with the angle-of-attack sensors. Neither airline had paid for the optional indicator that was linked to the AOA Disagree Alert, according to The New York Times.

Boeing is currently working on a software update that'll implement the AOA Disagree Alert as a standalone feature in all of its 737 MAX planes.