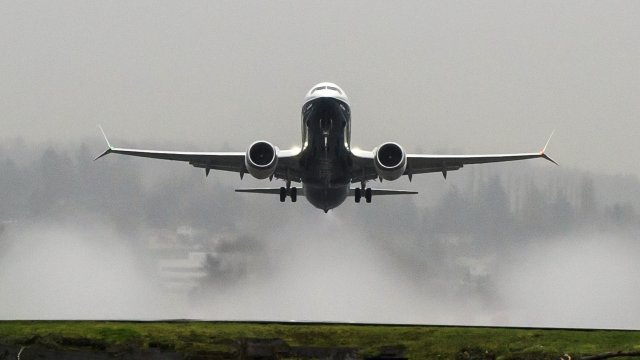 SMS
Boeing May Have Withheld Some Potential Risks Of Its 737 MAX Planes
By Katie Cammarata
By Katie Cammarata
November 13, 2018
Investigators believe this issue contributed to the crash of a new 737 MAX plane in Indonesia on Oct. 29 that killed all 189 people on board.
SHOW TRANSCRIPT

Boeing reportedly withheld information regarding the potential hazards connected to a system put in some of its 737 MAX models, according to The Wall Street Journal.

This issue is what investigators believe contributed to a new 737 MAX plane crashing in Indonesia in late October, killing all 189 people on board.

Indonesia’s National Transportation Safety Committee said the plane experienced “erroneous input from one of its Angle of Attack sensors.” That sensor helps keep the plane from going into an aerodynamic stall and falling.

But the automated stall-prevention system put into some 737 MAX models can, in unusual situations, push the nose of the plane down so forcefully it can't be pulled back up. Experts told The Journal pilots and airline managers hadn't even been told the system was put into the new planes and, so, weren't ready for the possible risks.

Last week, Boeing issued a safety bulletin to pilots explaining what to do if there are incorrect readings from the Angle of Attack sensors.

The company is reportedly working on a software fix that would likely lessen potential risks.