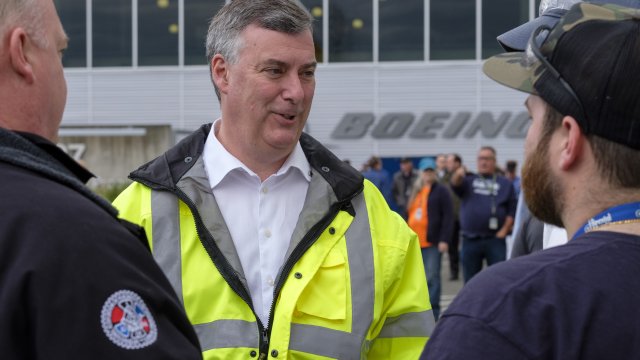 SMS
Boeing Fires Executive Who Oversaw 737 Max Planes
By Lauren Magarino
By Lauren Magarino
October 23, 2019
Boeing is shaking up its leadership, as the company continues to struggle with the aftermath of two deadly 737 max plane crashes.
SHOW TRANSCRIPT

Boeing is shaking up its leadership, as the company continues to struggle with the aftermath of two deadly 737 Max plane crashes.

The company fired the executive of its commercial planes division, Kevin McAllister.

The 737 Max was mostly developed by that point, but still needed to be certified by the F.A.A.

The plane later led to two crashes that killed 346 people.

Boeing now faces legal scrutiny from the Department of Justice, and Congress has criticized the company and its board for a lack of accountability.

McAllister has said he inherited many of the company's problems.

But McAllister also reportedly faced internal criticism for his handling of important customers and delays that have kept the 737 Max grounded for 8 months.

Either way, he said in a statement: "It has been an honor to serve with such a professional team for the past three years."

McAllister's replacement comes from within.

Boeing named Stan Deal as CEO of the commercial planes division, according to a statement.

Deal previously led the company's global services. He's been with Boeing for 33 years.

The personnel changes come at a hectic time for the company.

The company's CEO Dennis Muilenburg, who recently lost his role as board chairman, is set to testify before congress next week.

Next week will also be the anniversary of the crashed Lion Air 610 flight.