Boehner Has A Plan To Avoid Shutdown Fight: Push It To 2015 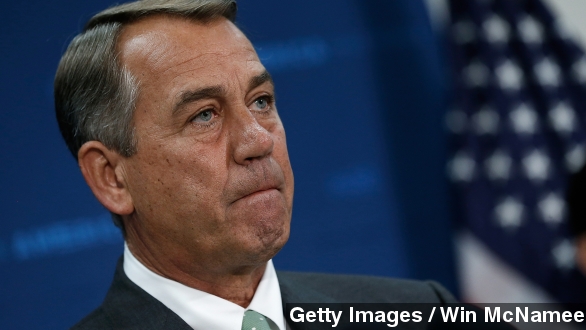 The House Speaker will likely separate Homeland Security's funding from the omnibus spending bill that has to be passed by Dec. 11.

"We're looking at a variety of options, both for right now and for when Republicans control both houses of the Congress next year," Speaker of the House John Boehner said Tuesday.

The Huffington Post, Washington Post and other outlets report House Speaker John Boehner is putting off a fight over immigration that could cause another government shutdown, pushing the debate to next year.

Next year, as in when Republicans will run Congress. At that point, Speaker Boehner will have more weight behind his challenge to the president's recent executive action.

"Today, our immigration system is broken, and everybody knows it," President Obama said from The White House last week.

With the deadline for the yearly appropriations bill coming Dec. 11, most Republicans want to somehow block that executive action.

But they don't want to shut down the government to do it, maybe in part because it was the GOP that caught most of the public anger over last year's shutdown, as shown in this Washington Post-ABC poll.

So instead, Republican aides say Speaker Boehner is considering detaching Homeland Security, which manages immigration, from that annual spending bill and giving it separate funding that expires next March.

That's two months after Sen. Mitch McConnell and Republicans will take over the Senate, riding a wave of election wins in last month's midterms. (Video via WCPO)

Of course, there are issues with this plan. For one, members of Boehner's own party said Tuesday the Speaker was punting and even extending funding too far.

And for the record, Boehner isn't publicly giving details just yet.

"No decisions have been made at this point," Boehner said Tuesday.