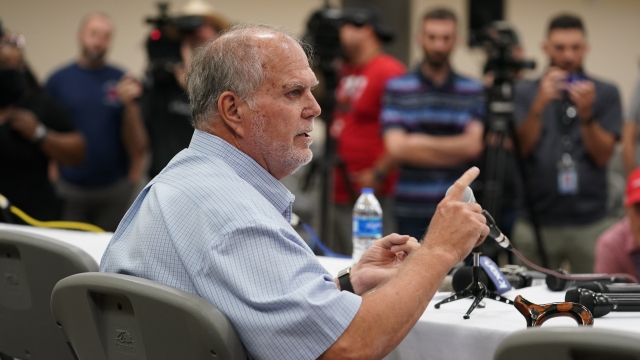 New body camera video of Uvalde police officers responding to the mass shooting at Robb Elementary School has been released.

A Uvalde police officer can be heard saying, "Yeah. He's in the class."

The video and an in-depth House investigation were delivered just hours apart. It marks the latest blow in one of the deadliest mass shootings, revealing numerous failures many community members already knew, but now have visual evidence to confirm."

If there's only one thing that I can tell you, is there were multiple systemic failures," Dustin Burrows, a Texas representative, said.

It's caused a renewed flurry of frustration in a community left fuming from unanswered questions.

"I'm pissed because we needed to have more fluid answers," Quintanilla-Taylor, the mother of a shooting survivor, said.

The town is reeling from emerging details in the last 48 hours.

More than 70 minutes ticked away with nearly 400 officers in or around the school.

The video confirms children in the class were calling 911, begging for help. Still, the video shows officers not moving in.

The investigation by a Special Texas House of Representatives Committee found "egregiously poor decision making," finding "law enforcement failed to prioritize saving the lives of innocent victims over their own safety."

It also pointed out the devastating decision of Uvalde schools' chief of police to treat the situation like a barricaded subject, potentially costing lives.

"The training and standards we set for officers is, if you know there is active shooting, active killing going on, or somebody is dying, the standard is you have to continue to do something to stop that killing or stop that dying," Burrows said.

The report details failure of others  agencies on site that were better equipped and trained to step up and take control, resulting in a lack of leadership and chaos.

The investigation highlighted other failures long before the gunman walked into Robb Elementary, exposing that social media platforms failed to report violent posts. Among the missed signs: The 18-year-old gunman had an online nickname, "school shooter."

Calls for accountability continue. The Uvalde mayor is responding with his own investigation.

"We have further questions as to who was responsible for taking command he announced he placed the Uvalde police department's acting chief on administrative leave as they look into his response," Mayor Don McLaughlin said.

For some in this community, it's about transparency and accountability for mistakes made.

"You need to say, hey, I'm wrong. You're right. I was there. I did nothing to serve and protect y'all. And I'm stepping down and I'm even going to turn in my badge because I'm a coward,"  Quintanilla-Taylor, the mother of a shooting survivor, said.

The report concluded that while some officers waited relying on bad information, others knew enough to act.