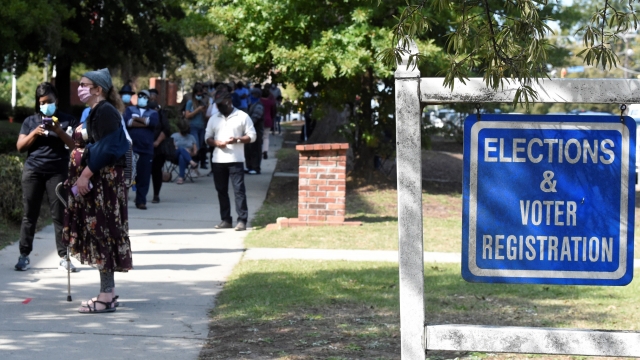 Confusion, disbelief and outrage is what newly obtained body camera footage from Florida police shows, as residents suddenly found themselves in handcuffs simply for casting a ballot. A total of 20 people were arrested on the same day back in August.

The charges were all the same – allegedly voting illegally in the 2020 election, but several of those arrested appeared to be completely unaware that they'd been accused of violating state law. Even the arresting officers were sympathetic to their confusion. The arrests are part of a crackdown on supposed voter fraud, spearheaded by Florida Gov. Ron DeSantis.

"The state of Florida has charged and is in the process of arresting 20 individuals across the state for voter fraud. These folks voted illegally in this case, and there's gonna be other grounds for other prosecutions in the future. They are disqualified of voting because they've been convicted of either murder or sexual assault," said DeSantis.

If convicted, they face up to $5,000 in fines and five years in prison.

"The voter registration form is very clear. It says, 'are you a felon or have you had your rights restored?' These people can make no mistake that they had not had their rights restored. It's a very lengthy process to get clemency. It takes years to do that," said Florida Secretary of State, Cord Byrd.

The 20 arrested individuals are accused of violating state law, which bars people convicted of murder or sex offenses from being immediately eligible to vote once their sentence is up. That specific group was excluded from a Florida constitutional amendment that restored the right to vote for many felons.  But as evidenced by these bodycam videos, there's still plenty of confusion about who's eligible, and who's not.

False claims about the 2020 presidential contest by former President Donald Trump and his supporters are spurring new interest in working the polls.

Florida state Sen. Jeff Brandes wrote the law that the governor is relying on to make these arrests, and even he says the state failed here.

"I think Gov. DeSantis started the Elections Crime Unit, and he was looking for to have some success at that Election's Crime Unit, this is kind of the lowest hanging fruit you could possibly find," said Brandes. "The state needs to do its job, listen, it should notify first and prosecute last. Ultimately, the state of Florida sent them a voter registration card. So listen, if you get a driver's license from the state of Florida, you would imagine you're allowed to drive, you get a voter registration card from the state of Florida. Shockingly, you would be imagine you would be able to vote. And so, I think the state's gonna have a very, very difficult time showing that these individuals did anything willingly, or with knowledge or intent."

The Florida Rights Restoration Coalition led the charge on restoring the right to vote for former felons. They say these arrests could further impact a group of people that are already nervous about voting.

Gov. DeSantis' opponent in the Florida gubernatorial race went a step further, saying this has nothing to do with voter integrity at all.

"These arrests are about one thing and one thing only — attempting to intimidate communities of color to deprive them of their hard-earned right to vote freely," said Florida gubernatorial candidate Charlie Crist.