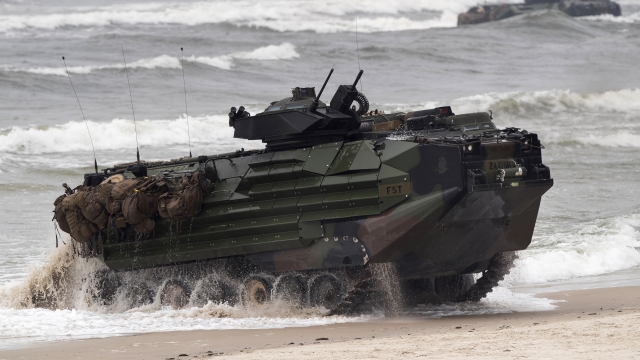 SMS
Bodies Of 8 Military Recovered After Vehicle Sinks During Training
By Alex Arger
By Alex Arger
August 8, 2020
The crew was on a training mission when their vessel sank off the coast of Southern California.
SHOW TRANSCRIPT

The bodies of seven Marines and a Navy sailor have been recovered a week after their training vehicle sank off the coast of Southern California.

On July 30, a crew of 16 was doing a routine training exercise near San Diego when their amtrac, or amphibious tractor, took on water and sank. Eight Marines were initially rescued, and one was found dead after the accident. The Marine Corps presumed the missing seven were also dead after a 40-hour search of the area.

The tank-like, 26-ton craft was found in 385 feet of water and was also recovered. Officials originally said the vehicle was too deep for divers to reach.

The Marine Corps has stopped all waterborne operations of its more than 800 amphibious assault vehicles until the cause of the accident is determined.

The crew ranged in age from 19 to their early 30s and were all wearing body armor and flotation vests. Col. Christopher Bronzi, commander of the 15th Marine Expeditionary Unit said, "We hope the successful recovery of our fallen warriors brings some measure of comfort."