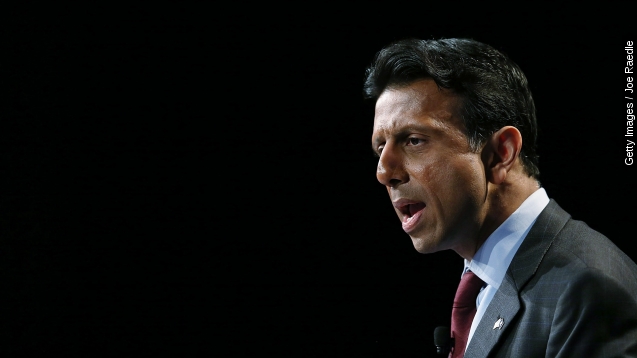 "Americans can do anything," Louisiana Gov. Bobby Jindal said in 2009.

When Bobby Jindal gave the Republican response to newly elected President Obama's address to Congress in 2009, the Louisiana governor was often called the GOP's Obama. (Video via C-SPAN)

And while his speech was widely panned:

"What the f*** was that?" Jon Stewart asked on his program.

It didn't hurt his stock enough to keep him from comfortably winning re-election or serving as chairman of the Republican Governor's Association. (Video via National Rifle Association)

But now, his approval ratings in firmly Republican Louisiana are lower than President Obama's, and as reporter Tyler Bridges explains in The Washington Post, his expected presidential run is only compounding local problems:

"The Republican governor is at open war with many of his erstwhile allies in the business community and the legislature, ... yet he has kept up his thinly veiled 2016 travels, having appeared at political events Monday in New Hampshire and Tuesday in Florida."

And that's troubling because his local popularity played a big role in putting him on the national stage, but it seems those fights with local legislators have cost him. (Video via Louisiana Public Broadcasting)

The measures he's tried to institute have failed. As The Week reported back in 2013, "Nearly two-thirds of respondents said they opposed his plan to abolish personal and corporate taxes in favor of a higher state income tax, while six in ten opposed his plan to privatize eight of the state's public hospitals."

While his announcement isn't expected until later this month, the latest polls have him at the back of the Republican pack for 2016, and he has a lot of ground to make up before the first Republican presidential debate in August if he wants to be part of the conversation. (Video via Iowa Public Television)