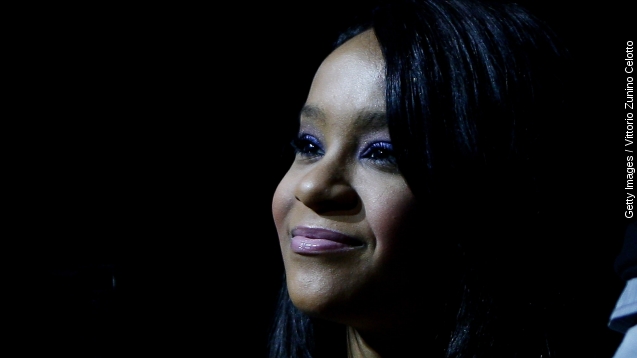 Bobbi Kristina Brown, the daughter of singer Whitney Houston, has died at age 22.

According to a statement from the Houston family obtained by several media outlets, Bobbi Kristina died surrounded by her family at Peachtree Christian Hospice in Georgia.

The statement said, "She is finally at peace in the arms of God. We want to again thank everyone for their tremendous amount of love and support during these last few months."

Bobbi Kristina was found unresponsive, submerged face-down in a bathtub at her Georgia home Jan. 31. She was hospitalized and placed in a medical coma.

Still unresponsive after months in the hospital, she was transferred to an Atlanta-area rehab facility in March and finally, to hospice June 24.

Bobbi Kristina's death comes close to three years after her mother's. Whitney accidentally drowned in a hotel bathtub on Feb. 11, 2012. Cocaine and other drugs were a factor in Whitney's death. (Video via Arista Records / Whitney Houston)

Born in 1993, Bobbi Kristina was the only child of Whitney and pop star Bobby Brown. Her parents divorced when she was 14, and Whitney was given custody of Bobbi Kristina. Bobby was by his daughter’s side while she was hospitalized.

The public came to know Bobbi Kristina better after her mother's death.

"You're getting through it," Oprah Winfrey asked during an interview.

She and other Houston family members appeared on a Lifetime reality show, on which Bobbi Kristina became engaged to Nick Gordon, whom Whitney took in as a young man. (Video via Lifetime / "The Houstons: On Our Own")

Bobbi Kristina and Nick were thought to have married, but in the wake of her hospitalization, her father's lawyer revealed the two never legally wed.

One of Bobbi Kristina's last public messages came on Twitter in late January; she said she and Nick missed Whitney "so much," with the hashtag "Anniversary."