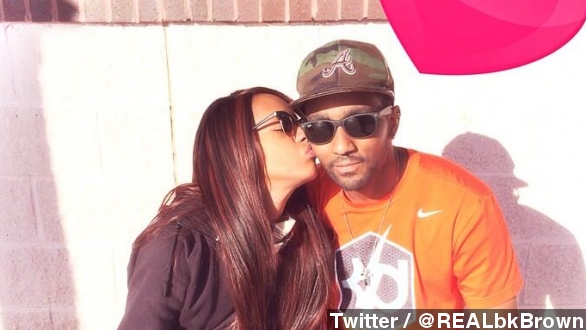 The 20-year-old daughter of the late singer Whitney Houston revealed on Twitter Thursday that she and her fiance, Nick Gordon, had tied the knot. (Via OWN)

She tweeted this photo of their ringed fingers with the caption, "#HappilyMarried• SO#Inlove" (Via Twitter / @REALbkBrown)

The announcement comes just six months after the couple got engaged and a year after the two were first romantically linked. (Via People)

But Brown and Gordon's relationship has always been a bit on the controversial side.

Although they aren't related by blood, Houston reportedly took in Gordon and raised him "like a son" alongside Brown. She never legally adopted him and left her entire estate to Brown. (Via Twitter / @REALbkBrown)

And when Houston died in 2012, Gordon made headlines when he attended her funeral with Brown and her grandmother by his side. (Via Hollywood Life)

Many have expressed their disapproval of the relationship, but Brown says she's tired of hearing what people have to say.

She posted to Facebook shortly after the engagement: "Let me clear up something, we aren't even real brother and sister nor is he my adoptive brother. My mom never adopted him. In fact, mommy was the one who even said that she knew that we were going to start dating."

The finer details of the wedding have yet to be released.