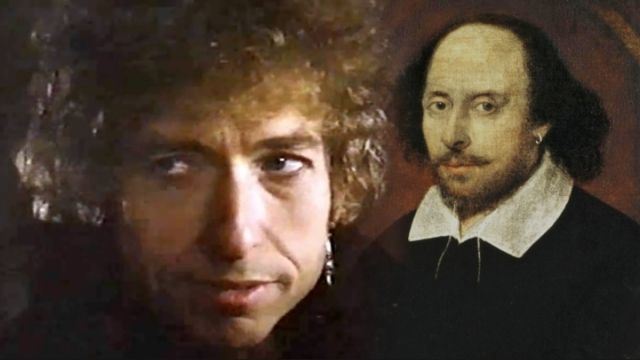 Ever since Bob Dylan was awarded the Nobel Prize, the question's been, "Do his lyrics really count as literature?"

It's a question Dylan says he's never asked himself. And in not asking that question, the musician compared himself to William Shakespeare.

Yep, that Shakespeare. Maybe the most famous writer in history.

In his Nobel Prize acceptance speech Saturday, Dylan said he's always been more concerned with questions like, "Who are the best musicians for these songs?" and "Is this song in the right key?" rather than asking if his lyrics count as literature.

Similarly, he guessed Shakespeare was too busy asking, "Who're the right actors for these roles?" and "How should this be staged?" to consider whether his plays were literature.

Dylan's got a point. Both his and Shakespeare's work were meant to be heard out loud. So they had to think about things typical novelists don't.

But Shakespeare's work might be more like literature than Dylan let on. During his lifetime, about half of Shakespeare's plays were published as small books.

And considering the number of playwrights who have received the literature prize, the Swedish Academy's made it pretty clear that scripts fit the bill.

Though Dylan said he's never asked if his songs are literature, he did thank the Swedish Academy for answering "yes."

And while Dylan may have compared himself to Shakespeare, a member of the Nobel Committee compared him to Ovid, "the romantic visionaries" and the "the kings and queens of the blues." How's that for literary company?