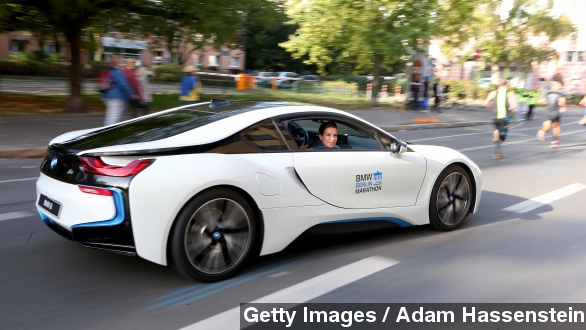 Though electric cars are rare, they have become much more available with the introduction of models from Ford, Chevy, BMW and — of course — Tesla. But there is still one major issue — range.

Even high-end electric cars, such as the Tesla Model S, only have a range of about 265 miles.  That's enough to get around town for a while without charging, but it makes leaving home for too long or going too far problematic.

BMW wants to solve that problem by making charging stations as common as streetlights. It's called "Light & Charge," and it combines the functionality street lights with electronic vehicle charging stations, using one or two LEDs to provide streetlight and a standardized connector for charging.

The company hopes to make its new streetlight-chargers more accessible and increase the use of electric vehicles by opening up these stations to any vehicle model and electricity provider.  Drivers will be able to pay via a mobile app.

This has been attempted before, but to date, it has seen limited success.

If these streetlights are widely adopted, it will make charging more accessible, but cross-country road trips will remain a difficult task in an electric car.

That's because charging up still takes much longer than filling up. Even with Tesla's "super-charger" technology, it takes 20 minutes to charge a Model S's battery halfway.

And to charge that quickly you actually have to find one of those charging stations, which though growing, are still sparse in some areas.