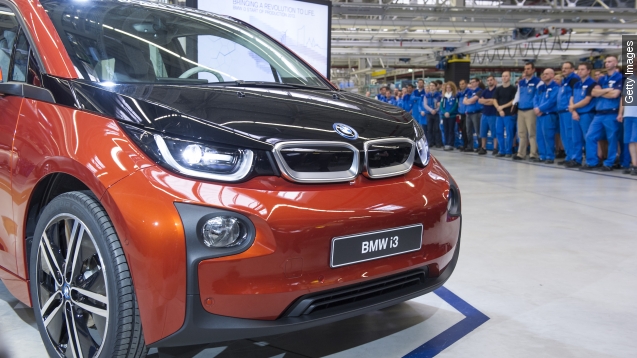 SMS
Rumored BMW Visit Could Mean Apple Is Working On Its Own Car
By Evan Thomas
By Evan Thomas
July 26, 2015
Apple execs reportedly visited BMW's production line in Germany to study the i3 electric car. Is this meeting about CarPlay or Apple's own vehicle?
SHOW TRANSCRIPT

Apple's not in the car business yet, but you can bet it will still generate headlines when it eyes other car businesses.

The latest is a report that first appeared in a German business monthly Manager Magazin.

Apple is reportedly interested in using BMW's i3 electric car platform as a foundation for its own electric vehicle.

According to the magazine, Apple execs visited the i3 production line in Leipzig, Germany, and studied the vehicle's carbon-fiber body construction. (Video via BMW)

And that's about where the facts run out. Apple's electric vehicle plans are still mostly rumors.

Though we do know Apple has hired its own stack of auto engineers.

And KPIX has tracked registrations for vehicles with some sort of roof-mounted camera assist back to Apple. (Video via KPIX)

This BMW visit looks like more evidence Apple is doing something with cars, but until the company comments, (and let's be honest; it never does) we won’t know for sure.

It could just be for radio, of course. Apple already lists BMW among its partners for its CarPlay phone connectivity suite, though the software has yet to ship in any of BMW's vehicles fresh from the factory. (Video via Consumer Reports)

It's not exclusive to BMW, either: As Automotive News reported earlier this year, two Ferrari models have incorporated CarPlay right off the line.