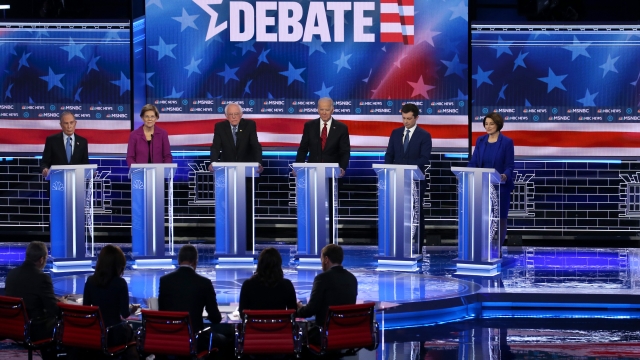 Six Democratic presidential candidates took the stage in Las Vegas Wednesday night for what ended up being one of the most fiery debates.

"It’s not a plan, it’s a PowerPoint. And Amy’s plan is even less, it’s like a Post-It note, insert plan here," Warren said.

"You're literally part of the committee that's overseeing these things and were not able to speak to literally the first thing about the politics of the country to our south," Buttigieg said.

"Are you trying to say that I’m dumb? Or are you mocking me here, Pete?" Klobuchar said.

It was the first debate appearance for Bloomberg, and he was an early and frequent target.

"I don't think you look at Donald Trump and say we need someone richer in the White House," Klobuchar said.

Bloomberg was attacked on multiple fronts, including "stop and frisk," his campaign spending and his history with workplace harassment lawsuits.

"We have a very few non-disclosure agreements..." Bloomberg said.

"How many is that?" Warren said.

"Let me finish. None of them accused me of doing anything other than maybe they didn't like the joke I told," Bloomberg said.

"When you say they signed them and they wanted the, if they wish now to speak out and tell their side of the story about what it is they allege, that’s now OK with you? You’re releasing them on television tonight?" Warren said.

"Senator, no. ... They decided when they made an agreement that they wanted to keep it quiet for everybody's interest. They signed the agreements and that's what we're going to live with," Bloomberg said.

Like previous debates, the candidates got passionate when talking about health care. But that also led to criticism about how they would pay for their varying proposals.

"I’m the only one on this stage that actually got anything done on health care. ...  It costs a lot of money. It costs $750 billion over 10 years, but I pay for it by making sure that Mike and other people pay the same tax rate their secretary pays at," Biden said.

"Canada can provide universal health care to all their people, half the cost. U.K. can do it. France can do it. We are the only major country on earth that can't do it. Why is that? And I'll tell you why. It's because last year the health care industry made $100 billion in profits," Sanders said.

Most of these candidates will be on stage together again next week for a debate in South Carolina.