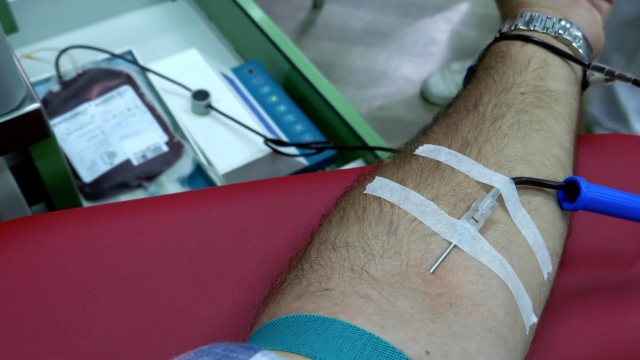 There's a critical need for blood donation because of the pandemic, but a group of people is left out of the donation pool: gay and bisexual men.

"It's incredibly frustrating. And frankly, I mean, just not even to tone it down, it pisses me off," says Dr. Greg Zahner, a resident physician at Massachusetts General Hospital.

He wrote "We Need Blood and I Am Not Allowed to Help" in the Journal of the American Medical Association. Zahner is gay and works in the front lines fighting COVID-19. Under FDA guidelines, men who have sex with men, or MSM, must abstain from sex for three months before giving blood. This restriction still applies to men in monogamous relationships.

"I wanted to donate blood and to help because there's a lot of shortage of blood right now. And unfortunately, still, with the FDA rules, I'm not able to do that," says Hunter Smith, a nursing student at Kirkwood Community College.

The FDA has changed these rules several times. In the '80s, early in the HIV epidemic, MSM were banned from donating at all to help reduce HIV transmission. In 2015, it was changed to a year of abstinence. And in April 2020, because of the pandemic, the FDA loosened the restriction to three months of abstinence.

"You could say, oh, great, that's progress. But I think that just really shows that this could have been enacted long before and that they were only making the change because now, suddenly, somehow it mattered," says Zahner.

Does science support this restriction? We turned to infectious disease and HIV expert Dr. Aniruddha Hazra from the University of Chicago Medicine.

"A lot of these sort of restrictions are very antiquated and no longer really based in science any longer," says Hazra.

According to the CDC, all blood earmarked for transfusions is screened for HIV, regardless of the donor. And advocates say blanket rules based on sexual orientation aren't nearly as useful as more targeted individual assessments.

"Sexual orientation is just that: orientation. It does not confer behavior, does not dictate behavior either," says Hazra. "I think individualized risk assessment is really the best way to understand who would potentially be a higher risk donor."

Over 500 medical experts agree, and they have signed an open letter to the FDA calling the three-month deferment for MSM an outdated, unscientific historical discrimination. And they are pushing for an individualized risk assessment instead. The FDA tells Newsy it's "considering alternatives to time-based deferral" and that it's currently conducting a pilot study that looks at this issue. But it doesn't have a timeline of when this study will be completed. So for now, potential donors like Dr. Zahner will have to wait.

"The hospital I work at is constantly asking us to donate blood because they're having a hard time getting donors and from the community just because people are scared to leave their homes. ... And I have a blood type that makes me a very valuable donor," says Zahner.