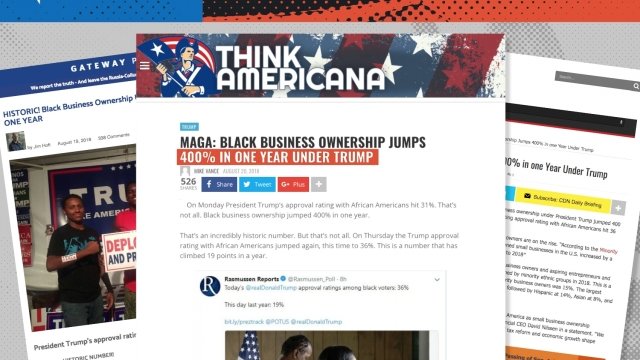 SMS
There's No Evidence Of A 400 Percent Rise In Black Business Ownership
By James Packard
By James Packard
August 29, 2018
Some of the president's supporters said he deserved credit for a 400 percent climb in black business ownership. That claim isn't backed up.
SHOW TRANSCRIPT

A handful of bloggers recently circulated the claim that the number of black business owners in the U.S. increased 400 percent in the first year of President Donald Trump's term. That claim was peddled online.

There's absolutely no evidence to support it.

The claim seems to be rooted in the results of a survey from two private financial companies. They worked together to get information on entrepreneurs. They wanted to know their demographic makeup, what motivates them to start a business and what sort of challenges they face in the process.

There's not a lot of clear information on how the companies got their data. But they say their results are based on about 2,600 responses from around the country. The margin of error, however, wasn't published.

Census data on the makeup of business owners in 2017 isn't available yet. But there's no reliable source that backs up a 400 percent jump in black business ownership in the president's first year.