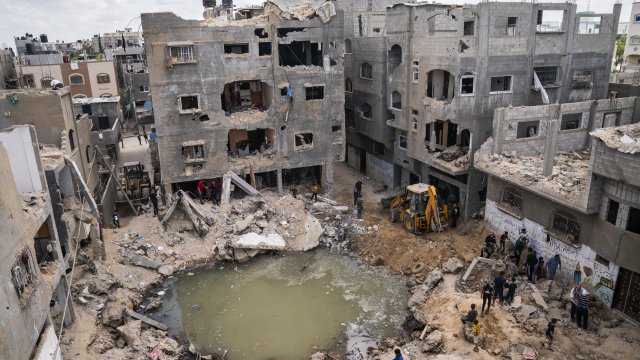 SMS
Gaza Rubble Revealed, U.S. Defends Israel's 'Right to Defend Itself'
By Alex Arger
By Alex Arger
May 23, 2021
U.S. faced with quandary of rebuilding from the rubble in Gaza without restocking Hamas militants.
SHOW TRANSCRIPT

As a cease-fire held out over the weekend in the Mideast, we’re seeing images of Gaza destruction there from hundreds of Israeli airstrikes...Drone video and photos show some city blocks reduced to rubble.

"The current estimates are around 300 buildings, which translates into over 1,000 housing units that have been absolutely destroyed and then of course there are many hundreds that have been partially destroyed and probably are inhabitable right now," said Lynn Hastings, humanitarian coordinator of the Palestinian territory, said. "There has been a total of six hospitals, 11 primary health care centers that have been damaged and one hospital not functioning currently because of electricity."

The question now….what comes next? Internal pressure is said to mounting against the western-backed Palestinian Authority and its president Mahmoud Abbas... while support for the militant Hamas is reportedly growing.

For the Biden administration...that’s a problem. The president wants to rebuild Gaza...without restocking Hamas, which fired an estimated 4,000 rockets at Israel over the 11-day clash... including some that hit this Tel Aviv suburb of Holon.

U.S. Secretary of State Antony Blinken weighed in on Sunday.

"And the fact of the matter is Hamas has brought nothing but ruin to the Palestinian people," U.S. Secretary of State Blinken said. "Its gross mismanagement of Gaza while it has been in charge, and, of course, these indiscriminate rocket attacks on Israeli civilians which have elicited the response that they did because Israel has a right to defend itself."

President Biden is also getting push back from some Democrats who want to cancel a $735 million arms sale to Israel.

“So you have a very difficult situation," Sen. Bernie Sanders said. "You have Hamas, a terrorist group. You have a right-wing Israeli government and the situation is getting worse. And all that I’m saying is the United States of America has got to be leading the world in bringing people together. Not simply supplying weapons to kill children in Gaza."

According to Reuters, Blinken will visit Israel as well as Palestinian Authority leaders in the West Bank on Wednesday and Thursday.

The U.S. goal continues to be a two-state solution…with an independent State of Palestine coexisting peacefully alongside the state of Israel.

“It's vitally important Palestinians feel hope and have opportunity, and can live in security, just as it is for Israelis. And there should be equal measures. So, ultimately, I think that that hope, that security, that dignity can — will be — found in a Palestinian state," Blinken said.