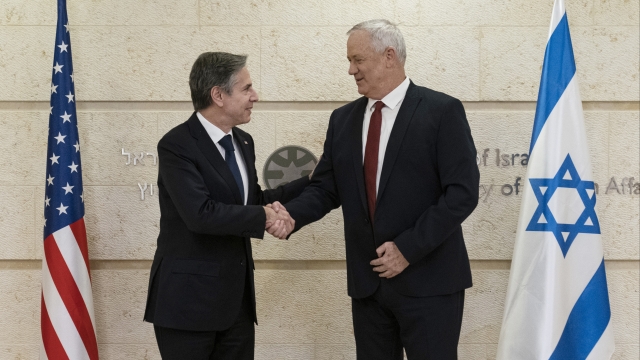 SMS
Secretary Of State Blinken Arrives In Israel, Aims To Push Peace Talks
By Simon Kaufman
By Simon Kaufman
May 25, 2021
He will also visit the West Bank, Jordan and Egypt.
SHOW TRANSCRIPT

The U.S. is looking to preserve a cease-fire between Israel and Hamas and push ahead on peace talks.

Secretary of State Antony Blinken arrived in Tel Aviv this morning. He'll also travel to the West Bank, Jordan and Egypt during his trip and meet with the leaders of each.

The White House hopes it's a step toward lasting peace.

"What the secretary is there primarily on this trip is to focus on immediate issues right now at hand, which is ensuring that we are creating conditions with our partners in the region for a sustained cease fire. And also discussing the path forward on rebuilding Gaza — something that there's a great deal of interest and support in the international community on. And there are great needs on the ground," said White House Press Secretary Jen Psaki.

While the White House emphasized rebuilding Gaza, it says U.S. officials won't communicate directly with Hamas because it's a terrorist organization. But Secretary Blinken will meet with Mahmoud Abbas, the head of the Palestinian National Authority.

Abbas met with Egypt's foreign minister yesterday. Egypt says it's working with the Palestinian authority toward the establishment of a Palestinian state.