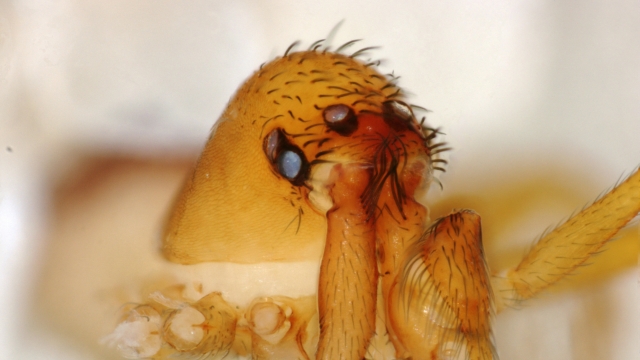 Spiders aren't just fast runners or gifted jumpers.  Researchers with the Smithsonian Institution say some hunt prey with a lightning-fast bite, too.

They hold their jaws open while they stalk prey, then snap them shut like a mousetrap. It's fast — blink-and-you'll-miss-it-several-times fast. Scientists have never seen spiders take fast bites like this before.

Researchers recorded the chomping spiders with cameras running at 3,000 frames per second, and they still barely captured the bite. This video is slowed down 150 times.

They describe it as "super-spider power," and that's not an exaggeration.

The speed and power of these bites exceeded what the spiders' muscles should be capable of, meaning they store energy somewhere like a coiled spring.

That happens elsewhere in nature. Mantis shrimp store power in their appendages for lightning-quick strikes. Trap-jaw ants spring-load their mandibles to attack prey or catapult themselves away from predators.