Blame Physics For Our Lack Of Futuristic Flying Machines 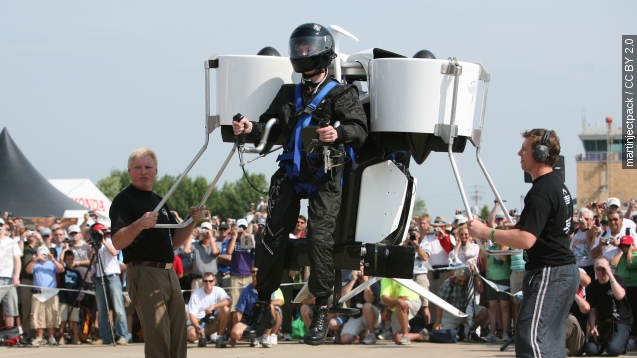 SMS
Blame Physics For Our Lack Of Futuristic Flying Machines
By Evan Thomas
By Evan Thomas
August 5, 2015
It's difficult to get things and people to hover in midair, which helps explain why jetpacks aren't everywhere yet.
SHOW TRANSCRIPT

According to Doc Brown's calendar, it's officially The Future. So where's our flying everything? (Video via Universal Pictures / "Back to the Future Part II")

Lexus tested out an early version of the hoverboard this month, which uses nitrogen-cooled superconducting magnets to float, and it can support a person. (Video via Lexus)

The thing about superconducting magnets is they have to stay chilled down to work. And they have to stay above the magnetic track they push off of. That's how Lexus did it, too. (Video via The Royal Institution)

And this board requires a copper-lined hover surface to generate the required magnetic fields. (Video via Hendo Hover)

So true hoverboards are out until we figure out how to free them from their magnetic bases. Sorry, Marty McFly. (Video via Universal Pictures)

Jetpacks are a tall order, too, in that to lift a human, you have to point enough energy down at the ground — without setting your legs on fire.

There are fixed-wing jet backpacks, but that's technically using a wing surface to generate lift rather than being a true jetpack. (Video via TED)

The Martin Jetpack is technically a "ducted-fanpack," but that doesn't roll off the tongue quite the same way.

Pumped-water rocket packs actually use jets of something pointed straight down, but they're altitude-limited. (Video via CNN)

Okay, so what about our flying cars?

And even DARPA has shown interest in something that might fly as easily as it drives. (Video via Lockheed Martin)

But infrastructure and regulation haven't caught up yet, mostly because the government has never had to come up with rules for something that's simultaneously a car and a plane.

Maybe "Back To The Future" was just too far ahead of its time. We'll set the clock for another 26 years.

This video includes images from martinjetpack / CC BY 2.0.