'Blackfish' Fallout Not Only Factor In SeaWorld CEO Ousting 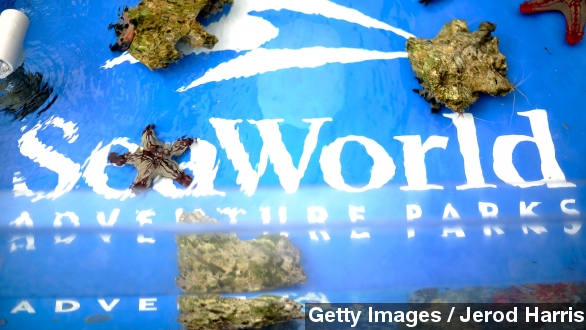 The media was quick to assign fallout from "Blackfish" as the reason SeaWorld's CEO is stepping down, but there's more to it than that.

SeaWorld's CEO Jim Atchison is stepping down, and many reports are pointing to the same speculated cause.

"Fallout today from last year's critically acclaimed documentary 'Blackfish' about the alleged mistreatment of orcas at SeaWorld parks ... now the CEO of SeaWorld for the last five years, Jim Atchison, has announced he is resigning," MSNBC's Tamron Hall reported.

When the documentary was released in July 2013, it kicked up quite a stir about how SeaWorld's orcas are treated in captivity, and many said it led to a shift in public opinion about the theme park.

Which is why the media was ready to attribute "Blackfish" as the cause of Atchison's ousting. Animal rights activists celebrated the news as a victory on Twitter.

But SeaWorld's ocean of troubles is a lot deeper than just the recent dip in public opinion. The company's problems have actually been mounting for a while now.

Attendance at SeaWorld has been falling since 2008, well before "Blackfish" premiered in 2013. Most recently, the company announced attendance was down 5.2 percent from just a year before, and its stock is down more than 40 percent since August.

That's partly due to stiff competition. While other parks had successful expansions like Universal Studio's "The Wizarding World Of Harry Potter," SeaWorld's new "Antarctica: Empire of the Penguin" attraction didn't do quite so well. Possibly because summer vacationers don't exactly want to spend time in a 30-degree replication of Antarctica.

With Atchison's departure, SeaWorld's board of directors announced a "restructuring across its entire 11-park enterprise," which will "result in the loss of some positions."

That won't include the changes animal rights activists have been calling for, such as setting up sea sanctuaries for the whales it currently has in captivity.

Instead, Bloomberg reports that SeaWorld is looking to expand in places like Russia and the Middle East where the company doesn't need to worry about its image as much.

Analysts expect Atchison's replacement will focus on damage control more than anything else.

"You're going to see a CEO come in that has more experience in public relations, in branding, in the image because something does have to be done," San Diego Union-Tribune reporter Lori Weisberg said.

Which is what leads Slate to run with the headline "SeaWorld's Whales Get a New Prison Warden."

The director of "Blackfish" is similarly unimpressed with the news, telling The Hollywood Reporter: "As far as the restructuring, seems like they're rearranging chairs on the Titanic. I don't hear that they're shifting in step with an informed public. Meaningful change would involve sea sanctuaries and an entire shift toward rehab release programs."

Atchison isn't entirely out of SeaWorld. He will move over to serve as the company's vice chairman and will receive a $2.4 million exit package as well.