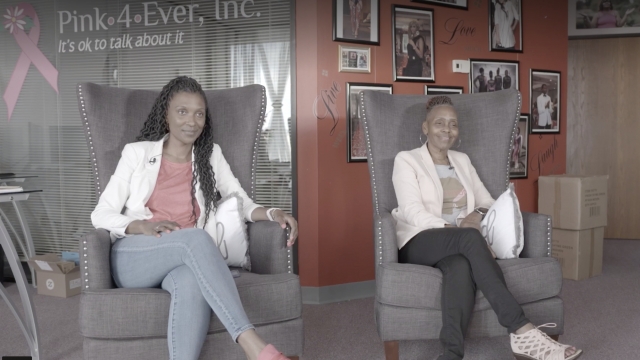 After years of spreading the same message, two women combined their efforts to help educate and support other Black women before and after diagnosis.

Under the Friday night lights, one group of teens won't be found in the stands.

Instead, they're on the sidelines, educating their peers about a diagnosis that may seem years away: Breast cancer.

For Danaasia Grundy, a Pink-4-Ever junior ambassador, the story of a young diagnosis is all too real.

"I feel like nowadays it's easier to convince people [to talk about it] because it is such an important topic," Grundy said. "It can happen to anyone."

Her aunt passed away from breast cancer at 30 years old, and her mom, Nadia Miller, the president of Pink-4-Ever, was diagnosed at 26.

She says at the time, it seemed like communication about breast cancer wasn't aimed at young people or women of color.

"If you think back, it seemed like a fluke when Black women were being diagnosed with breast cancer," Miller said.

Fellow survivor Lisa Hayes says that was her experience too. She dedicated her organization, Red Alliance, to ending disparities, which she says are caused partly by fear and lack of information.

After years of spreading the same message in the same city, the two women have combined their efforts. They were determined to give survivors something they say they didn't have: Representation.

That's why they trained an army of women at local churches, armed with accurate information, ready to support other Black women before and after a diagnosis. They also help cover the cost of mammograms, another factor they found to be a deterrent.

According to the National Cancer Institute, while White women are more likely to receive a breast cancer diagnosis, "the rate of triple-negative breast cancer, a more aggressive form of the disease, is twice as high in Black women."

"The first thing is education," said Dr. Worta McCaskill-Stevens with the National Cancer Institute. "About what is available, what our advances have brought us to in terms of outcomes, and then making these advances available, accessible."

According to McCaskill-Stevens, one of those advances may or may not involve 3D screening. To find out, researchers need a variety of participants.

"Screening is really designed to reduce advanced cancers," she said. "And the reason it's so important that we have participants of minority women is that 10% of breast cancers in Black women occurs in advanced stages. So we want to have a technology that's going to reduce that."

They also hope the study helps them understand more about false positives, which lead some women to neglect future testing.

Back in Indianapolis, Hayes and Miller say they've partnered with clinical researchers throughout the state on various studies and are encouraging other Black women to do the same.

"It means something, when a Black woman goes out to another Black woman, or that Black community hears from us," Hayes said.

They say representation matters, in the research lab and the public square.