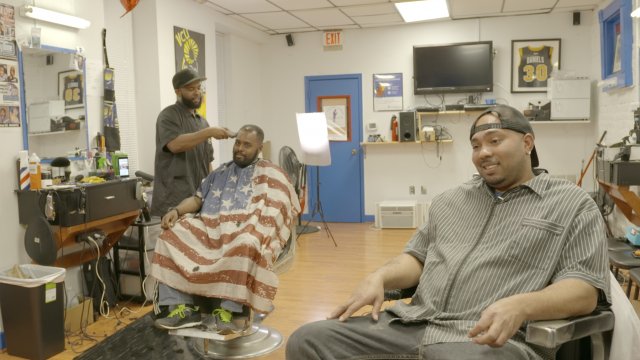 In the black community, barbershops are where people get a good lineup or cut and talk about almost anything, including politics.

"Sometimes people just don't know better," said Telvis Fitzgerald, who is the owner of Presidential Cutz in Richmond, Va. "And I'm not saying that he knew better not to do that face but at the same time you're with a group of guys just making fun of something and didn't think it[s] no harm."

Here in Richmond, Virginia at Presidential Cutz, owner Telvis Fitzgerald says people have had a lot on their mind after a racist picture of someone in black face on Governor Ralph Northam's medical school yearbook page surfaced. The governor has denied he's in the picture but he did admitted he darkened his face as part of a Michael Jackson costume in his 20's.

"Shocking to say the least, honestly I don't feel like it was something that was unknown to people," said Lavar Johnson, a barber at the shop who likes to keep up with political news. "Somebody knew. Somebody was waiting for the right time to drop the bomb on Governor Northam and us all," he added.

A Washington Post poll says voters are split on whether the Governor should resign, but a majority of black voters think he should stay on the job. Still, some wonder if he was sincere in his apology.

"Do you really care about us or are you just using this as a PR tool to keep your movement going in politics so therefore you don't lose our vote for anything else," Fitzgerald added.

Northam has pledged to make amends with Virginia voters and has reportedly started looking into ways to understand racial tension.

The Governor has announced plans for a listening tour to reach out to the black community but the barbers here at the shop say he should get out and engage with black voters where they can connect with him on a more personal level.

You know if the governor where to come in here and get a haircut, it's not that far away--- "Oh he could, he could definitely come--

Are you extending an invitation? "I would extend an invitation," Fitzgerald said. "I would like him to come in here and let's talk." (laughter)