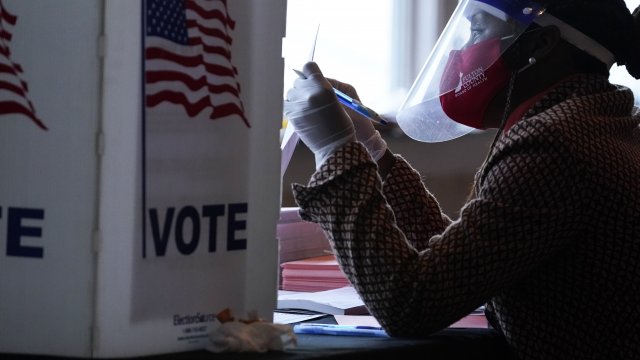 This week marks 56 years since the Civil Rights Movement’s so-called Bloody Sunday. Many Black Americans are marking the occasion by holding their own marches for voting rights, but new voting laws are just one thing in a long list of priorities for Black voters.

Cliff Albright and his team with Black Voters Matter are on a one week march across Alabama.

He says voting rights and holding elected officials accountable are a must.

"It's not enough that we send you there and you support voting rights, but you won't support what needs to be done procedurally in order to pass voting rights," Albright said.

That’s why his group was among a handful who boycotted President Biden’s recent speech on the topic, disappointed with the Senate’s failure to pass voting rights legislation and the President’s inability to rally an end to the filibuster.

"We've seen so many people on social media [saying], 'Hey, leave him alone. He's the president. He's not in Congress. He can't vote,'" Albright said. "We know that, but we also know that presidents have a lot to do with whether or not legislation gets passed."

In 2020, about 90% of Black voters lent their support to President Biden.

"The African-American community stood up for me," President Biden said. "You’ve always had my back, and I’ll have yours."

Today many of those same voters aren’t so sure about the State of the Union.

"Half of all Black Americans are pessimistic about the direction of the country," said Jessica Fulton, VP of the Joint Center.

Many of them are young people in battleground states like Michigan and Georgia, where a poll from Navigator Research shows the president's approval rating declining 25% since last year among Blacks under the age of 35.

It’s not just voting rights: Various polls show the economy and student loans are a also a concern, with many wanting to see total loan forgiveness.

"76% of the people that we polled agree with [forgiving] all student loan debt, which is significantly more than what President Biden promised during his campaign, but I think would make a significant difference in building the wealth of Black households," Fulton said.

Critics say some of these issues would have already passed through Congress if it weren’t for the filibuster and the need for 60 votes in the Senate, pointing the blame not only at the president but a pair of Senate democrats who want to see the rule remain.

"Black voters are less interested in hearing there are procedural challenges or that there are certain things that are going on that are making things difficult," Bailey said.

The Biden administration has worked to highlight the initiatives it's gotten passed — including the infrastructure bill, saying it’ll give opportunities to Black businesses and impact communities directly affected by lead pipes and a lack of public transportation.

Pollsters say Black Americans agree with the president’s proposals but want to see more, even if the more is the president himself, with 84% saying they think he should be more visible.

"Biden's predecessor was very good at the 'look at what I've done' aspect of the presidency, and this is, you know, visibility is a place where Black Americans have noted that, you know, President Biden has not been as visible as President Trump," Bailey said.

But dissatisfaction with the Democratic Party doesn’t necessarily translate to support for the GOP, especially when new voting laws and opposition to the president’s initiatives are Republican-led.

"About one in five Black Americans approve of the job that congressional Republicans are doing," Fulton said. "That suggests that people understand that there's something blocking the progress that they might otherwise feel."