Democrats Bring Message To The Deep South For 5th Debate 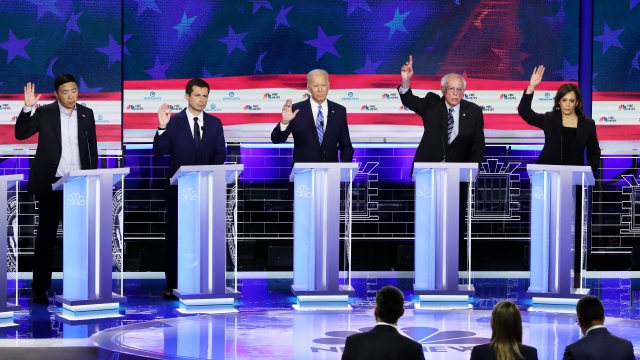 Most of the South has been reliably red in recent presidential races but Democrats will get the chance to make their case to voters there during the fifth primary debate in Atlanta.

What do you anticipate will be the main topics the candidates and moderators will discuss?

So a lot of times the debates take on the flavor of the location and Georgia for example there's a real intense interest in voting rights and issues related to equity and economic justice so that's certainly going to be a major part to engage the crowd.

Democratic strategist Joel Rubin says those issues are key to the party's goal of appealing to black voters. African American voters in South Carolina make up two-thirds of the Democratic primary electorate and they also account for a significant share of the vote in other southern states like Alabama, Virginia and Georgia.

There could also be clashes between the top polling candidates including former Vice President Joe Biden, and his progressive challengers, Senators Elizabeth Warren and Bernie Sanders. The 5th debate takes place as South Bend Indiana Mayor Pete Buttigieg has seen a surge in his support within the key early voting states of Iowa and New Hampshire, making him a likely target among his political rivals.

Six other candidates will be on stage including Senators Kamala Harris, Amy Klobuchar and Cory Booker as well as Representative Tulsi Gabbard, Andrew Yang and Tom Steyer.

The race for the nomination will likely grow even larger with former Massachusetts governor Deval Patrick recently jumping into the race and former New York City mayor Michael Bloomberg considering a run for the White House. And hanging over the entire event will be the ongoing impeachment proceedings against President Donald Trump.

My sense is that these candidates are not going to want to over emphasize the actual process of impeachment. They're going to defer to Nancy Pelosi and House Democrats and sort of back up their efforts but they will talk about the idea of sort of restoring integrity to the White House.

The debate will be hosted at Tyler Perry Studios in Atlanta on November 20th and for the first time this election cycle, all the moderators will be women. So far only a handful of candidates have qualified for the next Democratic debate that will be held in Los Angeles in December.