Black Pro Snowboarder Works To Increase Diversity In The Sport 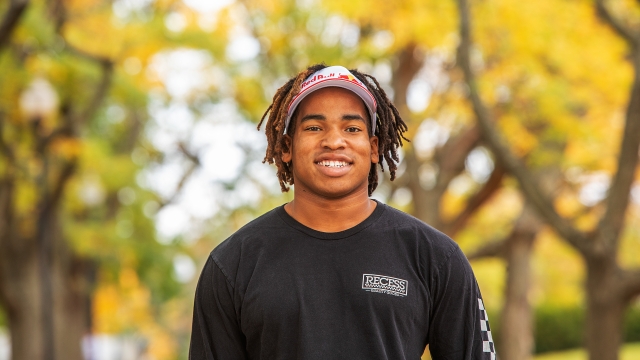 It was the kind of jaw-dropping performance the crowd had never seen.

Zeb Powell stealing the show at the 2020 X Games in Aspen, Colorado jumping and flipping his way right into fans' hearts and a first-place win.

But here's the thing, the rookie clutching the gold medal didn't even like snowboarding the first time he tried it.

"My teacher was mean, and she set me up backwards. None of it was appealing to me," Powell tells Newsy.

For a while he turned to skateboarding, but his raw talent on the snow could not be ignored.

"He's always been flipping and turning, and he's always been on a board or something that will let him fly through the air," Valerie Powell, Zeb's mother said.

His parents, who adopted him at five weeks old, started sending him from his North Carolina home to snowboarding camp in Colorado. In a sport that traditionally is as white as the snow, Powell stood out.

Newsy's Clayton Sandell: How many people were there doing this, that look like you?

Powell: There might have been one other black person on the mountain.

Sandell: You ever feel unwelcome in this sport?

Powell: Luckily, like, no. I don't really have anything bad to say about anyone.

But it isn't just that Zeb Powell is one of the few black faces on the slopes. Sports commentator Selema Masekela has watched generations of snowboarders over three decades. He says the 22-year-old has game-changing skills he's never seen before.

"He's a jazz musician on a snowboard. He improvises.  It's like oh, this is a type of snowboarding, and this is an ability, and an interpretation of the thing that is crazy, and so artistic and, and spontaneous, but highly athletic. And also, in the body of a young black kid who grew up in North Carolina?" Selema Masekela, sports commentator, tells Newsy.

Powell's first appearance at the X Games changed everything. He gained a ton of new follows and support on social media. Fans who maybe, for the first time, saw themselves.

"I heard a lot of them say they didn't even know that black people snowboarded, which is crazy. I mean, just coming from me, like I never even thought about it like that," Powell explained.

Powell is still getting used to all the attention, and all the selfies.

Powel: That's always crazy, I just kind of fully embrace it, try to talk to everyone.

But one thing he's sure of, he's using his new visibility to help make snowboarding much more diverse.

"I think the culture is just it's so fun to be around. I love it. I think a lot of people will love it," Powell says.

Inviting as many as he can to a sport that historically hasn't been very inviting.

"Recreating and luxuriating in the outdoors was sort of the one of the last safe spaces that were built mostly specifically for white people on the back end of segregation in this country.  And so, it's going to take a very long time for those things to change," Masekela explains further.

Powell didn't place at this year's X Games, but his mom says what's important is that her son knows he has a gift.

"And you got to use it right and stay humble and give back, and so far, that's what he's done. Which makes me extremely proud. Prouder than any medal he could ever win," Valerie Powell says of her son.

"It's exciting, because he really does have an opportunity to be so much bigger than then then snowboarding and to be like an icon for the sport in opening up accessibility and possibility to what the slopes can look like. It's like, you know, growing up watching Jordan or Kobe or Serena, and then to see it come along, in in a young Black man in America is just it just wildly powerful," Masekela says.

For now, Powell says he'll be spreading the word through the type of videos he makes with his friends, hot-dogging down the slopes and dropping into concrete canyons, making sure that even though he's one of the few Black pro snowboarders, Zeb Powell is not going to be the last.