'Black Panther' Holds The No. 1 Spot For The 5th Consecutive Weekend 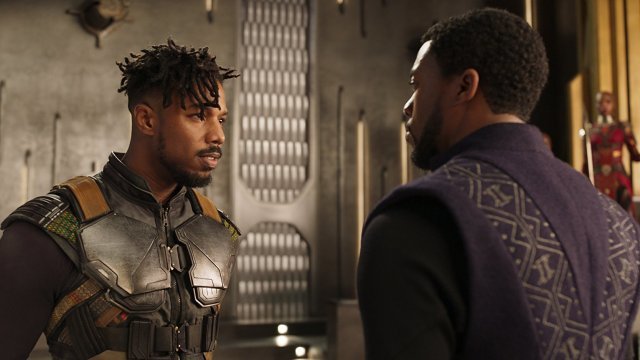 Continuing to make history five weeks after its debut is Marvel's "Black Panther," bringing in an estimated $27 million and holding on tight to the top spot. "Black Panther" is now one of just four films in the last 20 years to top the box office for five weeks straight.

"Black Panther" has now inched its way to $605 million in U.S. ticket sales. The U.S. box-office total of "Avatar" may be out of reach, but "Titanic," on the other hand, could be in striking distance for the Wakandan king.

Taking the No. 2 spot this week with a subpar U.S. debut is "Tomb Raider," bringing in an estimated $23.5 million.

That's nearly $25 million less than Angelina Jolie's first go at the iconic video game heroine — which, by the way, came out nearly 17 years ago. Inflation alone should have pushed this reboot a little further.

That said, it seems the saving grace for the latest Lara Croft may come from the overseas box office. Despite an average debut in the U.S., Alicia Vikander's "Tomb Raider" made more than $100 million in foreign ticket sales, pushing its worldwide box-office total to $126 million.

For what it's worth, "Tomb Raider" has a 49 percent on the Tomatometer, making it one of the better-reviewed films that draws its inspiration from a video game — although that isn't saying much.

Last but not least this weekend is "I Can Only Imagine," bringing in a better-than-expected $17 million in its first week out. This faith-based film only cost $7 million to produce, making this debut a blessing from on high. Hallelujah.