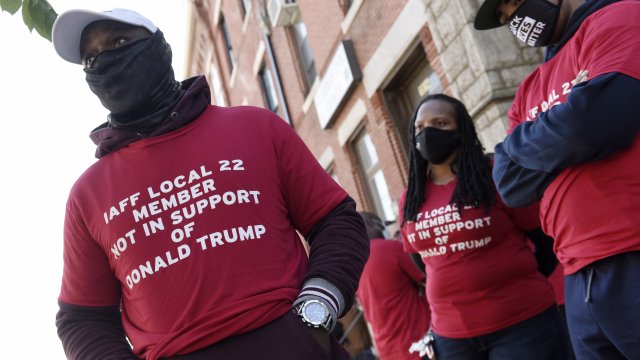 Police unions across the country have endorsed President Donald Trump, finding support in his "law-and-order" reelection platform. But a number of Black cops are rejecting their unions — saying their concerns over the president's campaign have been ignored.

The number of officers of color has doubled in the last three decades but many departments do not have enough Black and Hispanic officers to reflect the racial makeup of the communities they protect.

That can put Black officers feeling their unions' public support of the president is out of step with them — and the neighborhoods they police.

"And now this is the outrage because we are members of these organizations. I mean, these unions and they don't take in consideration of our feelings or our, what we think about the whole situation of Donald J. Trump, then they don't care about us," said Rochelle Bilal, the current Philadelphia Sheriff and a former president of the Guardian Civic League, a Black police association.

Many Black police groups were formed to focus on equality within departments and they've expanded their mission to speak out about how the job affects the larger African-American community. In August the National Association of Black Law Enforcement Officers condemned police misconduct and the use of deadly force, causing tension between larger unions and minority police organizations.

The president has touted his support from multiple police unions — some of which have publicly endorsed a candidate for the first time.

The Fraternal Order of Police, the largest police union in the U.S. representing more than 355,000  thousand officers, endorsed the president in September, saying, "During his first four years, President Trump has made it crystal clear that he has our backs. Our members know that he listens to the concerns of our brothers and sisters in uniform and is able to make tough decisions on the issues most important to law enforcement."

Some public servants, firefighters, paramedics, emergency responders and law enforcement professionals has denounced the FOP for not listening to their concerns on the endorsement.

In New York, Black officers said their union's endorsement of President Trump undermines every police officer’s ability to remain neutral and nonpartisan in the eyes of the public.

National FOP leaders say they're open to talking over concerns with those who don't agree with the endorsement but that it's a fair one. An officer who oversees the vote says each of the 33 state chapters cast an endorsement ballot for President Trump during its local, then statewide then national voting process.

Additional reporting from The Associated Press