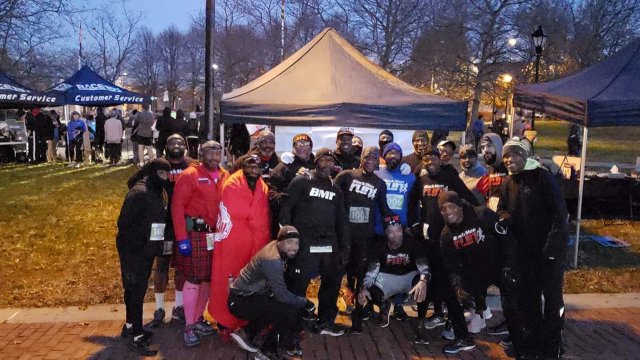 SMS
Black Men Reflect On The Need For Good Physical And Mental Health
By Amber Strong
By Amber Strong
March 17, 2022
Keenon James heads the Washington, D.C., chapter of Black Men Run. He says it's his duty to lead by example.

Keenon James started running because it was affordable and it gave him peace of mind.

These days James runs with another purpose. As head of the Washington, D.C., chapter of Black Men Run, he says it's his duty to lead by example.

"Our emphasis is a healthy living, healthy lifestyle, but also building that network, building our tribe internally," James said. "So, you know, when I'm looking for a plumber, it's probably the guy that I run with on Wednesday."

The group of more than 700 is a brotherhood of jokes, encouragement and advice that James describes as exercise-meets -barbershop.

"You have people who can relate to you. And so that makes it a lot easier to communicate and find the words that sometimes you can't with your colleagues at work or even family."

As captain, safety is top of mind for James, heightened after the murder of Ahmaud Arbery.

"It's hard when a group of 12, 15 Black guys said, 'Hey, we found this nice park, and it might not be in the neighborhood where most of us live, but it's a great park, a great trail.' But there's some fear factor, you know, of going to go run and whether there'll be a problem," he said.

But it's not just Arbery. James says it's a time of high anxiety all around for fellow Black men.

"Whether I'm running in the neighborhood or making a short drive to somewhere to go for a run and some trail of some park, it's reality. And, you know, where a Black man gets behind the wheel of his car? It's some anxiety on that trip, long or short. And so it still is there," James said. "It's a tough situation, but I think that we're starting to make some inroads and working on a lot of things. Personally, that focus on cultural competency is working with officers understanding and acknowledging: Here's the situation. So, how do you exhibit your profession and understand that this is the climate we live in? But it's a tough time. It's an extremely tough time. And the elevation of gun violence in the community is making it real as well."

And according to Everytown for Gun Safety, Black Americans are three times as likely to be fatally shot by police.

Those are numbers that are very familiar to James, who has worked on federal programs promoting police-community relations. He's also a gun violence survivor.

James' brother Sean was murdered in Takoma Park, Maryland, in 1993.

"It's not over because of days or hours or years," James said. "For me, it's coming up on 29 years since I lost — my brother was taken — and that trauma is there. That effect is there."

Doctors say that impact, be it discrimination or community violence, takes a toll.

"For some people, depending on the level of that negative interaction related to to violence or discrimination, it can also put them at a higher risk of developing things like post-traumatic stress disorder, or PTSD," Turner said.

He calls the barriers to treatment the 4 A's: Accessibility, Acceptability, Availability and Appropriateness.

"Depending on the state, services can range from $75 to $200, depending on the level of professional that you're seeking. So that's a huge barrier for many individuals," Turner continued. "You also know, acceptability — stigma is a huge concern for many communities. And so that being concerned about, you know, being diagnosed and having that label — sort of what that means to your self-esteem — can be a huge factor for some individuals in terms of accessing care."

Turner says one solution to increasing acceptability is more conversations like the ones James says he has on his weekly runs.

"A lot of men that I've come in contact with don't deal with the emotional aspect," he said. "They get through the instance and they decide 'I'm going to build a wall.' It's no longer something that they're going to talk about, but it keeps manifesting."

And when it comes to discrimination,  the group plans to be vigilant but keep on running and pushing against the stigma, wherever it may be.